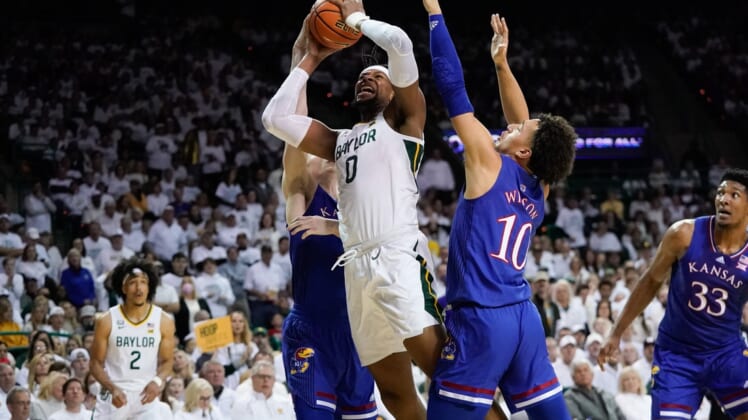 Flo Thamba scored 18 points and Jeremy Sochan added 17 Saturday as No. 10 Baylor roared back from a slow start and tightened the Big 12 race by downing No. 5 Kansas 80-70 at Waco, Texas.

The Bears scored on nine of 10 late possessions, a run that included a three-point play by James Akinjo with 1:03 remaining, before running out the clock on their last trip.

Akinjo netted 12 points and Adam Flagler scored 13 for the Bears, who fell behind 16-4 at the outset and did not lead until the second half. Matthew Mayer added nine points and 12 rebounds, while Thamba grabbed nine boards.

Ochai Agbaji scored a game-high 27 points for Kansas but made just 8 of 22 shots as the Jayhawks had their four-game winning streak snapped. Christian Braun and David McCormack added double-doubles. Braun posted 17 points and 10 rebounds, while McCormack had 10 points and 13 boards.

Kansas used a quick start to lead by as many as 13 in the first half but Baylor stormed back behind a 16-4 closing run and trailed just 32-31 at halftime.

Thamba scored 12 of the Bears’ first 17 points on 6-for-9 shooting before teammates began to heat up.

Thamba’s follow shot with 5:22 left in the first half launched a Baylor rally that included two baskets by Flagler.

Braun netted 10 and Agbaji nine in the half to lead the Jayhawks, who finished 2-for-10 and scored just twice on their last 11 possessions. Remy Martin returned from a knee injury that forced him to miss the previous seven games and drained his first two attempts.

Each team shot worse than 39% for the half. Baylor missed all eight 3-pointers it attempted while Kansas did not shoot a free throw. The game drew a crowd of 10,268, a Baylor record.