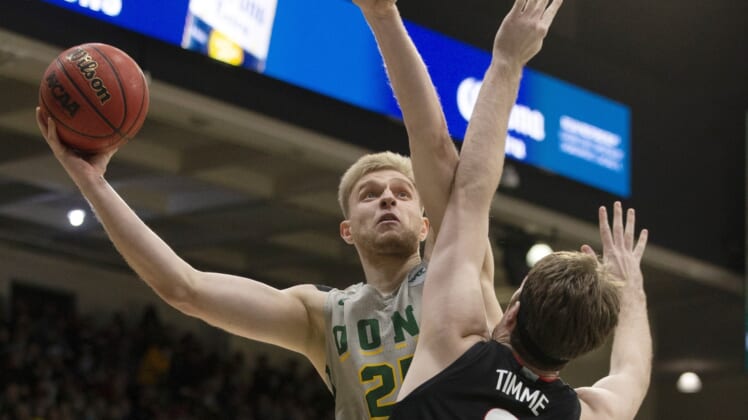 The Dons (22-8, 9-6 WCC), who are in third place in the conference, lost for the second time in their past three games.

The Bulldogs opened the game at their typical blistering pace and shot 66.7 percent in the first half.

San Francisco kept the game close for a half thanks to eight Gonzaga turnovers. But the Bulldogs began to separate with an 11-2 run over the first four-plus minutes of the second half to take a 63-44 lead.

The Dons pulled to within 10 with 2:52 left on a three-pointer by Julian Rishwain. But Gonzaga answered with a pair of Andrew Nembhard free throws and a layup by Drew Timme to stem the tide.

Khalil Shabazz led San Francisco with 17 points while Jamaree Bouyea and Yauhen Massalski each had 14 points. Massalski also had eight rebounds and Rishwain finished with 13 points and seven rebounds.

Shabazz had a scary moment late in the game when he took a hard elbow to the face from Nembhard as he was guarding him near the sideline with 4:32 left. Shabazz, who was bleeding from the hit, remained on the floor for a couple of minutes as he was attended to by team trainers. He was forced to leave the game and did not return. Nembhard was subsequently charged with a flagrant foul.