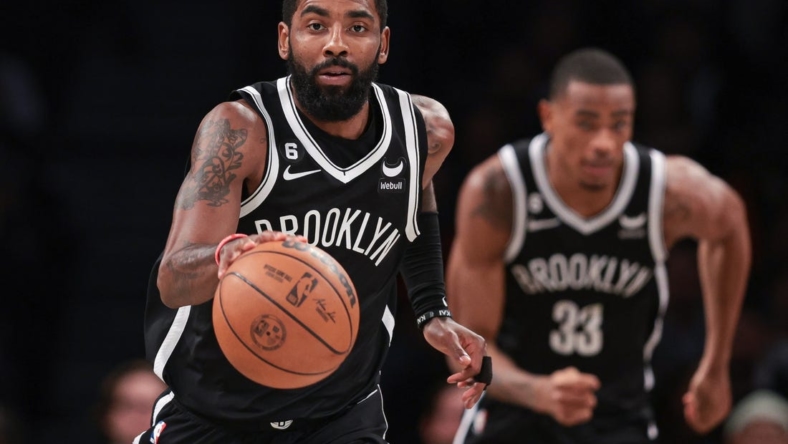 Nike paused its partnership with Kyrie Irving on Friday after a week in which the Brooklyn Nets star became embroiled in a controversy over a social media post promoting a book and movie that contain antisemitic material.

The shoe giant had been set to release a new Irving-branded product, the Kyrie 8.

The company said in a statement, “At Nike, we believe there is no place for hate speech and we condemn any form of antisemitism. To that end, we’ve made the decision to suspend our relationship with Kyrie Irving effective immediately and will no longer launch the Kyrie 8. We are deeply saddened and disappointed by the situation and its impact on everyone.”

Irving has been a Nike partner for eight years, and he had an $11 million contract with the company as of 2019, according to Forbes.

However, the two sides haven’t always been on the best terms. According to USA Today, in July 2021, Irving called photos of the in-development Kyrie 8 “trash,” adding, “Nike plans to release it without my OK regardless of what I say, so I apologize in advance to all of my sneakerheads and true supporters of the KAI11 brand.”

However, he subsequently walked back those remarks, saying the next month, according to The Athletic, “It was unfair to put the blame on Nike or any one person. With that being said, we are diligently working, restructuring and reimagining things together to make sure we get it right.”

The Nets suspended Irving for no fewer than five games Thursday night, saying they were “dismayed” that the guard did not denounce antisemitism when speaking to reporters in the aftermath of his controversial post.

Irving later apologized, though not before the Anti-Defamation League said it was rejecting a donation from him because “it’s clear that Kyrie feels no accountability for his actions,” chief executive officer Jonathan Greenblatt said.