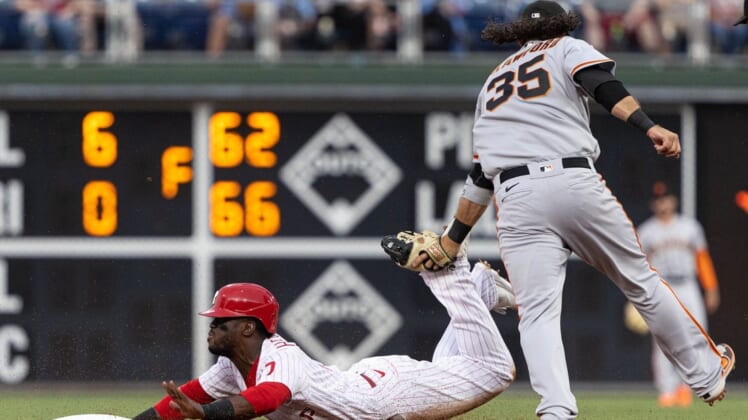 Nick Maton hit a home run, a single and drove in three runs and Kyle Schwarber homered, singled and knocked in two runs as the host Philadelphia Phillies rallied past the San Francisco Giants 6-5 on Wednesday.

Odubel Herrera and Bryson Stott added two hits each for the Phillies, who snapped a five-game losing streak.

The Phillies played without Jean Segura (fractured right index finger) and Bryce Harper (right forearm). Segura is expected to be out for 10-12 weeks.

Corey Knebel tossed a scoreless ninth inning for his ninth save in 12 chances.

Wilmer Flores hit a three-run home run and Tommy La Stella added two hits and an RBI for the Giants, who had their three-game winning streak snapped.

Evan Longoria was held out of the starting lineup with a sore right shoulder, but he came on to pinch hit in the eighth inning and struck out.

Giants starter Carlos Rodon tossed five innings and allowed six hits and two runs (one earned) to go along with six strikeouts and one walk.

Jarlin Garcia (1-2) allowed four runs in one-third of an inning and took the loss.

The Phillies went ahead 1-0 in the third inning when Rhys Hoskins hit an RBI single to center field.

The Giants managed only one hit through the first four innings, a leadoff double by La Stella.

Philadelphia took a 2-0 advantage in the fourth following an RBI bunt single by Maton. Maton was recalled from Triple-A Lehigh Valley as Roman Quinn was designated for assignment.

Donovan Walton opened the sixth for San Francisco with a double down the left field line. Jason Vosler followed with an RBI double and La Stella added an RBI single to tie the game at 2. After Mike Yastrzemski was hit by a pitch, Flores crushed a three-run homer for a 5-2 lead.

Maton and Schwarber each hit a two-run homer off Garcia in the sixth and the Phillies regained a 6-5 lead.