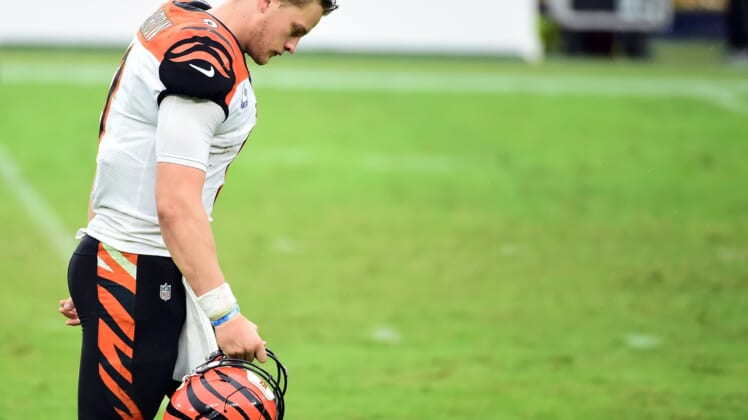 Week 5 of the NFL season delivered some incredible performances, but a few quarterbacks weren’t able to match their peers’ efforts. Even on another Sunday with jaw-dropping stats across the league, a few passers just couldn’t deliver.

Surprisingly, some of the worst performances in Week 5 came from marquee quarterbacks. The caliber of signal-callers who we’ve grown used to seeing dominate every week, fell well short of expectations. As we always see in a quarterback-driven league, a bad game regularly translates to ugly losses.

Let’s take a look at the worst quarterback performances in the NFL from Sunday’s Week 5 action.

Rookie quarterbacks go through a lot of growing pains in their first NFL season and it’s no different for Burrow. He benefited from facing some bad defenses in recent weeks and tore them apart. Facing the Ravens in Week 5, it was a learning moment for the No. 1 overall pick.

Not only did he throw the ugly interception, he also suffered a second turnover at the hands of a former teammate. Burrow was crushed by linebacker Patrick Queen, immediately coughing up the football. He fumbled for a second time, but Joe Mixon saved him by knocking it out. Cincinnati never had a chance in this one, especially with Burrow completing just 19-of-30 attempts for 183 yards. Things won’t get easier in Week 6 against the Indianapolis Colts.

Things are getting worse in Atlanta. In previous weeks, at least the team could hang its hat on Ryan playing relatively well. Averaging 26.5 points per game, this unit was at least respectable. Unfortunately for fans of this franchise, now even Matty Ice can be counted on.

Carolina ranked as a bottom-seven defense against the pass in DVOA before taking the field in Week 5 of the NFL season. While Ryan didn’t have Julio Jones on Sunday, Calvin Ridley is a great receiver and Russell Gage is a dependable weapon. Yet, Ryan couldn’t put anything together against the Panthers. He completed 21-of-37 attempts, needing garbage time to elevate his yards per attempt (6.1) and quarterback rating (63.6). The day could have been saved, but an ugly interception in the end zone sealed one of the worst performances on Sunday.

This is a strange feeling. On paper, this is a matchup that Jackson easily should have taken advantage of. Cincinnati’s defense isn’t exactly the most consistent nor disciplined, a dream scenario for Baltimore’s big-play offense. The reigning NFL MVP got plenty of chances in Week 5, but delivered an underwhelming performance compared to his standard.

Jackson completed 19-of-37 attempts, falling well short of the 68.4% completion rate he held coming into Sunday. Jackson missed a few throws and faced plenty of pressure, which took a toll on his stats. More surprisingly, Cincinnati neutralized him on the ground (three rushing yards). The Ravens still won easily and that’s why they are a Super Bowl contender.

We’ll start with the disclaimer. Starting a quarterback coming off a high-ankle sprain behind this offensive line was never going to work. San Francisco is being dominated at the line of scrimmage this season and things got even worse in Week 5. Now, with that said, Garoppolo was horrendous.

Jimmy G threw two awful interceptions in the first half and also coughed up the football. If that wasn’t enough to make fans turn the game off, he completed only 7-of-17 attempts for 77 passing yards. A 4.5 yards per attempt is just as ugly as this offensive line. It’s a good thing Kyle Shanahan benched Garoppolo for his own safety, but things will get even worse next week against the Los Angeles Rams.

The Colts hoped Rivers would bring stability to the quarterback position, protecting the football and helping this team stay in games. When this defense is on point and Indianapolis can put it in cruise control with low-scoring games, Rivers is fine. As we saw on Sunday, the results are disastrous when the game is put in his hands.

Rivers had been fortunate not to have a pick-six this season, but that luck ended in Week 5. His first went to the house and gave the Cleveland Browns a 27-10 lead. In the fourth quarter, with the pressure on him in a one-score game, Rivers wilted. He had an intentional grounding for a safety then threw an interception on his next drive. Ultimately, the costly mistakes cost Indianapolis. Once again, the quarterback is the ceiling on the Colts’ hopes for contending.