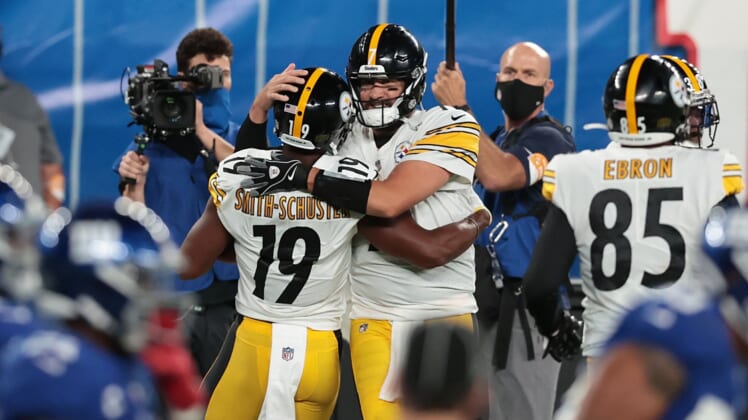 Ben Roethlisberger made his first appearance in an NFL game Monday night in almost a year. The rest of his Pittsburgh Steelers were more than up to the task against the New York Giants.

A game that pitted one upstart team against a veteran-laden squad ended up with Big Ben leading his Steelers to an impressive 26-16 win after initially trailing 10-3.

On the other hand, the Giants struggled to do much on either side of the ball. That included Saquon Barkley being completely bottled up on the ground. Here are our biggest winners and losers from Pittsburgh’s 10-point win over New York to open the 2020 NFL season.

This NFL Defensive Player of the Year candidate made his impact known more in coverage than actually rushing the passer Monday evening. That just goes to show us how much of a difference maker Watt is heading into his fourth NFL season.

That interception of Daniel Jones set up a touchdown for Pittsburgh to pull the score within one point. It was a huge play with New York up seven at the time. When all was said and done, Watt recorded two quarterback hits, two passes defended, one tackle for loss and that one interception.

We’re accustomed to Barkley making those eye-opening plays. That was no different Monday night against a stout Steelers defensive front. Unfortunately for the former NFL Offensive Rookie of Year, said play was limited to just one. He was bottled up on the ground throughout the game, including putting up negative-three yards on his first 11 attempts.

New York’s offensive line was a disastrous throughout the game. That can’t be denied. However, Barkley simply must show more consistency week in and week out. Gaining six yards on 15 rush attempts just isn’t going to get it done.

A fourth-round pick out of Kentucky back in 2019, Snell showed promise with James Conner banged up towards the latter part of his rookie campaign. That included 91 yards on 19 attempts in a Week 17 loss to the Baltimore Ravens. Apparently, Snell ran with that performance during the offseason and heading into training camp. That did not change Monday night.

Snell, 22, helped make up for the loss of Conner (ankle injury) by putting up 113 yards on 19 attempts for an average of 5.9 yards per tote. The ability to give Ben Roethlisberger balanace on offense loomed large as Pittsburgh won its season opener

Pittsburgh figured it had a running back of the future after letting Le’Veon Bell walk following the 2018 season. For good reason. Conner gained 1,470 total yards and 13 touchdowns with Bell holding out that year. Unfortunately, the inspirational running back missed six games and dealt with injuries throughout the 2019 season.

After putting up nine yards on six attempts Monday night against New York, Conner once again exited with an injury. This time, to his ankle. It’s really not something you want to see happen to a young man who has already gone through so much in his life. The hope here is that Connor will be fine moving forward.

Giants general manager David Gettleman received a lot of flack for trading a third and fifth round pick to the Jets for Williams last October. Everyone knew that the former sixth overall pick was slated to hit free agency following the 2019 season. Williams, 26, ended up tallying 11 quarterback hits and just two tackles for loss in eight games with New York. This did not stop the Giants from placing the franchise tag on the former USC standout, guaranteeing him $16.12 million for the 2020 season.

At least for one game, Williams lived up to his pre-draft hype and might have quieted skeptics. As the rest of his Giants defense wore down throughout the game, the defensive lineman continued to play at a high level. Williams ultimately finished Monday night having recorded two quarterback hits, two tackles for loss and a sack. It was a brilliant overall performance from the young man.

There’s a reason why New York engaged in trade talks surrounding this former first-round pick. A catch-first tight end, Engram has missed 13 games over the past two seasons. The Giants just have not been able to rely on him to remain healthy. When on the field, Engram has performed well. In fact, he caught 44 passes in eight games a season ago.

This did not repeat itself in New York’s opener Monday night. Engram caught all of two pass for nine yards on seven targets throughout the evening. Minkah Fitzpatrick had answers for him on a consistent basis. If the Mississippi product can’t perform at a higher level in Jason Garrett’s offense, the Giants might have to reconsider a potential trade.

A bonus winner here. Playing in his first game since last September, Big Ben needed to show that he was not rusty. It was also important for the future Hall of Fame quarterback to take a hit or two. After showing some discomfort in the knee area and elbow early on, Roethlisberger was seemingly unbothered throughout the remainder of the evening.

Big Ben led Pittsburgh to touchdowns on three of four possessions before putting the game away with a touchdown pass to JuJu Smith-Schuster later in the fourth quarter.

When all was said and done Monday evening, Pittsburgh’s veteran quarterback completed 21-of-32 passes for 229 yards with three touchdowns and zero interceptions. It was a mistake-free performance from Big Ben in his first appearance in nearly a year.