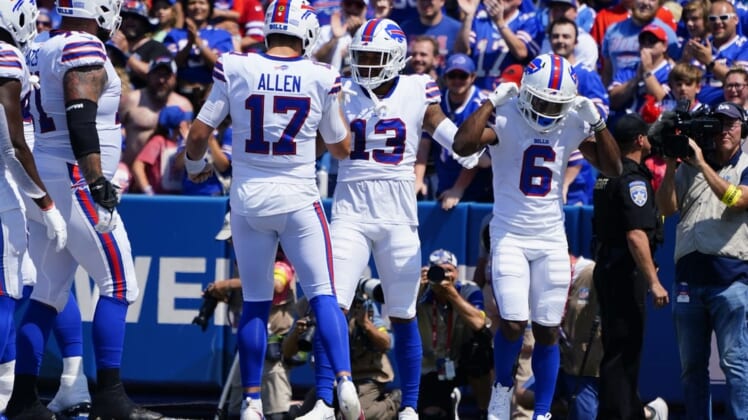 Josh Allen made his preseason debut and Case Keenum completed 16 of 18 passes for 192 yards and a touchdown as the Buffalo Bills cruised to a dominant 42-15 win over the Denver Broncos on Saturday afternoon in Orchard Park, N.Y.

Allen got the start and completed all three of his pass attempts for 45 yards and found Gabriel Davis for a 28-yard touchdown. Keenum then took over before Matt Barkley, who threw for 65 yards on 7-for-8 passing, closed the game under center.

Buffalo’s running game was also dominant, as Duke Johnson rushed for two touchdowns. Though they each ran the ball just four times, both Devin Singletary and rookie James Cook averaged over nine yards per carry.

Brett Rypien completed 22 of 26 passes for 191 yards and provided the Broncos’ only touchdown of the day when he connected with tight end Eric Saubert for a 1-yard strike early in the fourth quarter. Brandon McManus kicked three field goals, including a 55-yarder.

After Igwebuike found the end zone, Jack Coan lead the Colts on an 11-play, 72-yard drive that he capped off with a 26-yard touchdown pass to Samson Nacua. Indianapolis opted to go for two, but Coan’s pass to Nacua was incomplete. Coan finished with 83 yards, and Sam Ehlinger had 136 on 9-for-11 passing with two touchdowns.

Patrick Mahomes threw for 162 yards and a pair of touchdowns as Kansas City defeated visiting Washington.

Mahomes wasted no time finding his rhythm, leading the Chiefs to an early 14-0 lead. The Commanders sandwiched a Harrison Butker field goal with a 9-yard touchdown pass from Taylor Heinicke to Cam Sims and a rushing score from Jaret Patterson to pull within three, but running back Tayon Fleet-Davis found the end zone with 2:06 left in the fourth to erase any chance of a comeback.