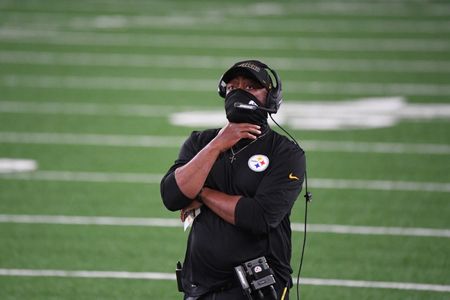 The NFL postponed Sunday’s Week 4 matchup between the Tennessee Titans and Pittsburgh Steelers due to an outbreak of COVID-19 among Titans players and team personnel, the league announced Wednesday.

The league is expected to reschedule the game for Monday or Tuesday night.

“The Steelers-Titans game, originally scheduled for Sunday at 1 p.m. ET, will be rescheduled to allow additional time for further daily COVID-19 testing and to ensure the health and safety of players, coaches and game day personnel. Details on the new game date and time on either Monday or Tuesday will be announced a soon as possible,” the statement reads.

The Titans also reported five positive tests among team personnel, including outside linebackers coach Shane Bowen, who did not make the trip to Minnesota.

Pittsburgh Steelers coach Mike Tomlin said after his team’s practice on Wednesday that there is a “strong possibility” the game will be held Monday. He told reporters he wasn’t thinking ahead about how a game Tuesday would affect preparations for the team’s Week 5 game against the Philadelphia Eagles.

“We live one week at a time,” Tomlin said.

In extended comments about the outbreak that has hit the Titans, coach Mike Vrabel said they have done everything the league has asked of teams.

“I know there’s going to be a lot of questions about the game, and about who’s to blame and where it started,” Vrabel said. “Nobody’s to blame. We’re in a pandemic. Unfortunately things happen.”

He added: “Since receiving the protocols in August, we’ve followed those by the letter and that we’re conscious of everything that we did. This is a very unfortunate situation, but one that were confident we will be able to handle safely with … the players’ best interest in mind.”

And like Tomlin, he said his team — currently holding team meetings remotely because their team facility is closed — will be ready.

“We’ve worked on short weeks before,” Vrabel said. “We’ve played three games in 13 days. … It will be important that the time we do get to spend practicing, we take advantage of it.”

“(The players) said, “Coach, we’ll play whenever they want us to play, and under any circumstances we’ll prepare the best that we can, and we’ll play,” Vrabel said. “There’s been no pushback. I asked this morning to just check in mentally, to see where they were. Guys were understanding of the situation, guys weren’t looking to point fingers or blame anybody, they were looking for ways to make us better and help us out in this situation. … We are proceeding to play not on Sunday, but potentially Monday or Tuesday.

There has been no announcement yet on the status of Sunday’s game involving the Minnesota Vikings. Their Week 4 game could also be postponed pending COVID-19 test results this week. The Vikings hosted the Titans on Sunday in Minneapolis and the team’s facility was closed Tuesday and Wednesday. The Vikings plan to reopen Thursday.