COVID-19 continues to mar the Cleveland Browns' playoff hopes, as another coach tested positive for the virus on Saturday. 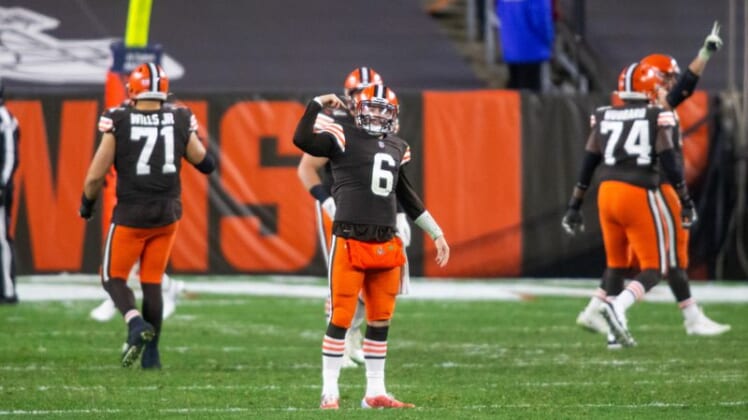 (Reuters) -The Cleveland Browns closed its team facility on Saturday after another member of the coaching staff tested positive for COVID-19, a day ahead of their critical regular-season finale.

The team had been cleared to return to practice on Friday after they had been forced to shut down due to players and a staff member testing positive for the coronavirus. But 24 hours later those plans again changed.

“The team will continue virtual meetings as the facility is currently closed while contact tracing is conducted,” the Browns said in a statement on Twitter.

The Browns, who are trying to reach the playoffs for the first time since 2002, face divisional rival the Pittsburgh Steelers on Sunday after losing to the New York Jets 23-16 in Week 16 with their top-tier receivers sidelined on the COVID-19 reserve list.

The team also said that offensive line coach Bill Callahan and offense line assistant coach Scott Peters would not be at Sunday’s game due to COVID-19 protocols.

The NFL told reporters earlier this week that it was planning to move ahead with the game on Sunday, with scant room for delays or postponements in the final week of the regular season.

Elsewhere in the league, NFC South winners New Orleans Saints will face the Carolina Panthers on Sunday without any of their existing running backs, the NFL Network reported https://www.nfl.com/news/saints-will-be-without-entire-rb-room-on-sunday-due-to-close-contact-to-alvin-ka, after all were forced to go on the Reserve/COVID-19 list.

The NFL is marching toward a Tampa, Florida, Super Bowl in February amid a surge in new cases of the novel coronavirus across the United States, which crossed the 20 million mark this week.