The Cubs get the Yankees’ No. 12 prospect, RHP Alexander Vizcaino, and outfielder Kevin Alcantara, ranked No. 9, in the deal. The Cubs are picking up all of Rizzo’s remaining salary.

The move comes a day after the Yankees traded for slugger Joey Gallo from Texas.

“All good things come to an end,” Rizzo said in an interview on the field at Wrigley. “It’s going to be a tough second half here, which a lot of us here aren’t used to in a long time, so to be able to go to another historic franchise like the Yankees, it’s unbelievable. … It’s going to be another special opportunity for me for these next three months. I’m just going to enjoy all of it.” 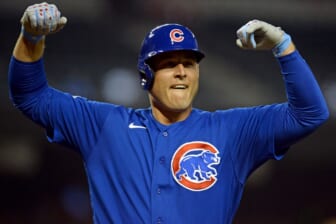 He came to the Cubs via trade with the San Diego Padres in 2012 and helped the Cubs break their 108-year World Series drought by defeating the Cleveland Indians in 2016.

Rizzo was drafted in the sixth round of the 2007 amateur draft by the Boston Red Sox.

The Yankees are nine games behind the Boston Red Sox after their 14-0 drubbing to the Tampa Bay Rays on Thursday. They are three games back of the second wild-card spot. Boston was still in action Thursday evening against the Toronto Blue Jays.

The Cubs are 50-54 after Thursday’s loss, lagging nine games behind the second National League wild-card spot.