New York Knicks reportedly could trade Obi Toppin to Pacers: How a deal might look

The New York Knicks reportedly could break up the playing time long-jam at power forward by sending 2020 first-round pick Obi Toppin to a long-time conference rival.

The Knicks have had a problem at power forward for the last two-plus seasons. While at first, it was a good problem to have it has devolved into a messy and often frustrating situation. Starter Julius Randle delivered an MVP-level performance in Obi Toppin’s debut season in the league. It led to a massive contract extension for the veteran and a reason to be patient with the youngster.

However, Randle’s regression the following season and Toppin’s growth caused a minute’s problem at their position. Unfortunately, the one-time All-Star’s play and contract made him difficult to trade so Toppin could get more time on the court. Making matters worse, the duo was a nightmarish defensive combo for coach Tom Thibodeau. Which quickly killed that as a possible playing time option.

While the New York Knicks have been hesitant to move such a high-potential talent in Obi Toppin, his inconsistent play this season has made the team more open to the idea of a trade, and it seems they have an interested party in the Indiana Pacers.

On Friday, Heavy.com NBA insider Sean Deveney reported that the Knicks and Pacers were recently in talks about a possible deal that could send the high-flying big man to Indiana ahead of the Feb. 9 NBA trade deadline.

“He fits in Indiana, especially if they keep Turner. Obi is a rim-runner, he has some toughness, he has athleticism. He needs minutes and a team that is rebuilding with young talent like Indy is a really good match.”

Obi Toppin does seem like a very good fit for an Indiana team that has surprised this year. They have the sixth-best record in the Eastern Conference and several very talented young stars. However, what could be the framework of a possible trade? 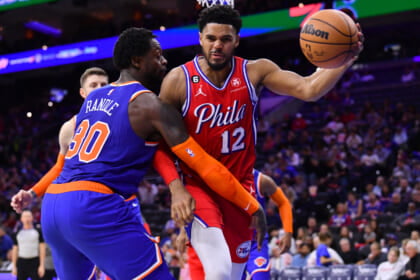 What could Obi Toppin trade to Indiana Pacers look like?

The Pacers have three first-round picks in next spring’s NBA Draft. Their own, and picks from the Celtics and Cavaliers, which are sure to be late-round selections. The Heavy.com report suggests one of those picks could be included in a deal for Toppin. Which fits the Knicks’ strategy of stockpiling future first-round picks to place in a deal for a disgruntled superstar.

Another route the Knicks could go would be to make Toppin a valuable chip to package with Evan Fournier to get the $18 million he is guaranteed for next season off their books. The Pacers are one of the few teams in the league with the cap space to take on Fournier’s money without having to match salaries.