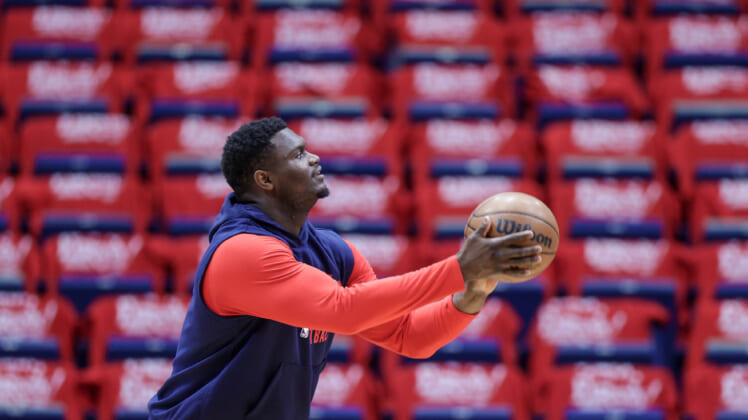 Zion Williamson quickly became a sensation throughout the basketball community once he finally saw the floor in his rookie season, 45 games into the year. The issue then, was tearing his meniscus during the preseason.

After one year at Duke, the New Orleans Pelicans made Williamson the No. 1 pick, but he played in just 24 games during his rookie year. It didn’t matter. Williamson already made his mark, averaging 22.5 points per game as he became a star.

In his second season, Williamson nearly tripled his appearances, starting 61 games, becoming an All-Star as he bumped up his scoring output to 27 PPG.

It was during the offseason of his third year when Williamson suffered a Jones fracture in his foot, which required surgery. Somehow, team officials still believed he could be healthy in time for the start of the season, but he ended up missing the entire year, as he suffered setbacks along the way.

One potential reason for those setbacks? With his ability to work out strenuously undoubtedly impacted by his injury, Williamson gained more weight.

According to reports, Williamson showed up to training camp well over 300 pounds. Considering he is listed at 284 pounds, it’s not ideal. But we don’t know what his actual playing weight is. Still, it’s safe to say an ideal amount for his frame is below 300.

The Pelicans seem to agree. In fact, contained within the newly-signed five-year, $192 million contract extension are specific weight clauses or escalators built to incentivize Williamson to stay below 295 pounds for the duration of the deal, according to Christian Clark. Specifically, ‘the sum of his weight and body fat percentage must be under 295’.

If Williamson doesn’t meet these standards, the guaranteed amount in his contract can actually be reduced.

In some ways, this strange stipulation included in Zion Williamson’s contract isn’t that wild. Most contracts have built-in escalators that allow players to earn more based on their on-court accomplishments, or sometimes for even being available to suit up instead of being injured.

Joel Embiid, for example, had a ‘games played’ structure included in his second contract that allowed him to make more money, as long as he could stay healthy. It wasn’t a big deal at the time, and Embiid has since remained durable.

That’s not to say Williamson’s experience will be the same as Embiid’s, but obviously, he wasn’t scared of the contract escalators. After all, Williamson signed his name on the dotted line.

Who knows, maybe this will be the added motivation Williamson needs to stay in tip-top shape for the next stretch of his career. At 6-foot-6, 284 pounds, Williamson is an explosive player. From what we’ve seen, there’s no need for him to put on additional weight to be effective in the NBA, so if he can better understand how to take advantage of his size without getting out of control, Williamson could be truly special.

Meanwhile, Zion has hired a personal chef to help make some changes this offseason and he has plans on being the league MVP this year. If he can play in 75% percent of his team’s games, the Pelicans will be a strong choice to get past the first round of the Western Conference playoffs.

Most importantly, Williamson needs to stay on the floor, and if staying below 295 pounds is one of the keys, so be it. He doesn’t seem to mind.