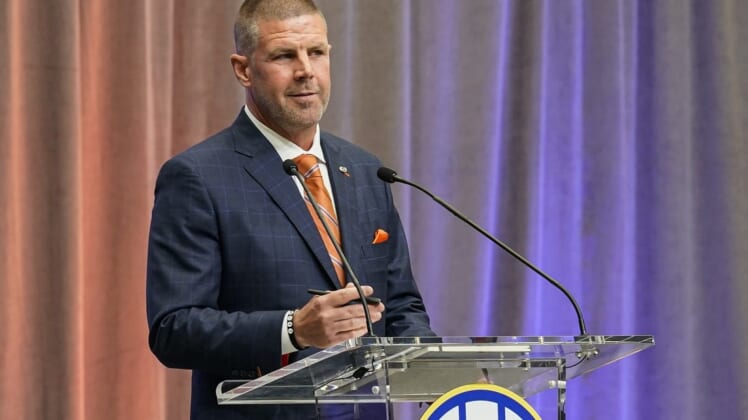 Billy Napier coached Louisiana to a 33-5 record over the past three seasons to earn his opportunity of Florida’s new coach.

He doesn’t need to be reminded the Gators lost more games (seven) last season than he did over his final three seasons with the Ragin’ Cajuns.

Napier clearly knows there’s work to do after replacing Dan Mullen. But he also doesn’t want to write off chances of excelling right away.

“This 2022 team that we have is a new team, it’s a new year, a new set of challenges and opportunities,” Napier said Wednesday at SEC Media Days in Atlanta. “I think each year each team is its own entity. They got to start over every year.

“This is a first-year staff at a new place with a new roster. We’ve got a lot of players and a lot of staff that are learning our way, right? A lot of new roles. There’s lots of roles to be determined on our team. We’ve got a core group of veteran players. We have a big portion of our team we think has ability, but it’s inexperienced and needs to develop.”

Napier can sense the hurt from a long season lingers.

Florida lost five of its last seven games and gave up 52 points in one of the wins during that span — against FCS opponent Samford.

The Gators lost by 27 points to Georgia, 23 to South Carolina and 12 to non-conference opponent UCF. Florida did lose by just two to Alabama.

“I like this group,” Napier said. “I think they’ve got a chip on their shoulder. They’re excited about the opportunity to earn some respect.”

For the Gators to take a step forward, they will need a big season from quarterback Anthony Richardson.

“I’ve been impressed. I think he’s remained humble,” Napier said. “He’s got a little bit of an edge. I think he wants to prove himself.”

In spot play last season, Richardson completed 59.4 percent of his passes for 529 yards, six touchdowns and five interceptions. He’s highly dangerous on the ground as he gained 401 yards on 51 attempts — a gaudy 7.9 average — while scoring three touchdowns.