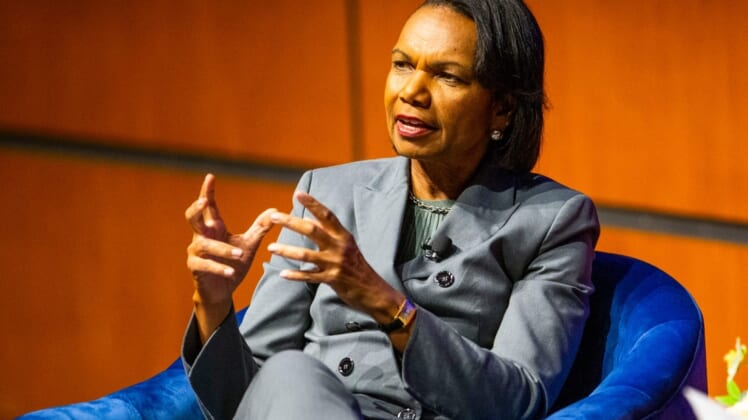 The incoming ownership group of the Denver Broncos has added a high-profile partner: Condoleezza Rice, the former secretary of state and a lifelong football fan.

“A highly respected public servant, accomplished academic and corporate leader, Secretary Rice is well known as a passionate and knowledgeable football fan who has worked to make the sport stronger and better,” said Rob Walton in a news release issued on behalf of the Walton-Penner Family Ownership Group. “Her unique experience and extraordinary judgment will be a great benefit to our group and the Broncos organization.”

Rice grew up as a Cleveland Browns fan and recently recalled her anger the day then-owner Art Modell fired Hall of Fame coach Paul Brown. It was in January 1963 and she was 8.

“I went and ripped all the Browns posters off the wall in my room,” Rice said last week at a golf-related event in Akron, Ohio. “I have to admit for a little while I was a Cincinnati Bengals fan. For a very little while. Then when the Browns came back, I went all-in again.”

Now, she’s going to have to change her allegiance to another AFC team. But at least she has some Denver ties. Rice earned her undergraduate degree in political science and her Ph.D. from the University of Denver.

Rice, 67, currently is a fellow at the Hoover Institution at Stanford.

The Walton-Penner group did not disclose any financial terms of the Rice deal.

In June, the group led by Walmart heir Rob Walton, agreed to buy the team from the Pat Bowlen Trust for a record $4.65 billion. The deal is expected to be approved by NFL owners before the start of the 2022 season.