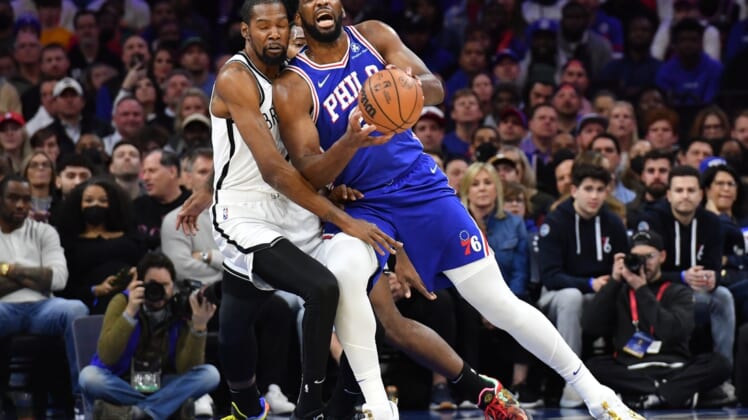 This was the first matchup since last month’s blockbuster trade that sent James Harden and Paul Millsap to the Sixers for Curry, Andre Drummond, Ben Simmons and two first-round draft picks. Simmons didn’t play, but sat on the bench and was booed throughout the game.

Joel Embiid led the Sixers with 27 points and 12 rebounds, and Tobias Harris added 16 points. Harden had 11 and passed Reggie Miller into sole possession of third place all-time for career 3-pointers made. But Harden shot 3 of 17 overall from the field.

Georges Niang also scored 11 and DeAndre Jordan had 10 as the Sixers fell for the first time in six games with Embiid and Harden both playing.

The Nets never trailed and built a 40-23 lead after the first quarter. They extended the gap to 72-51 at halftime thanks in large part to 64.4 percent shooting and Durant’s 18 points.

Conversely, the Sixers shot just 27.1 percent in the first half despite Embiid’s 21 points.

When Drummond scored in the low post with 3:42 remaining in the third quarter, the Nets extended their advantage to 96-67.

Brooklyn held a commanding 102-70 lead at the end of the third, and Irving opened the fourth with a 3-pointer, the Nets’ 14th of the game, for a 35-point advantage.

Facing such a large deficit, Sixers head coach Doc Rivers started the fourth quarter with five bench players. Philadelphia’s frustration bubbled over when Shake Milton was whistled for a technical foul with 9:18 remaining.