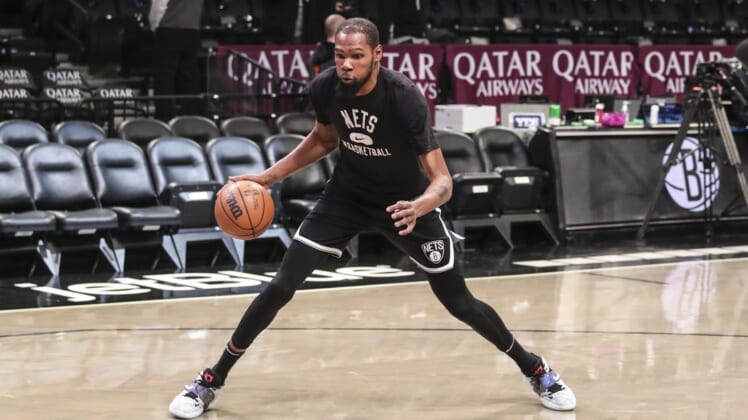 Kevin Durant is getting work in on the court, but Brooklyn Nets coach Steve Nash said he still isn’t sure when the superstar will be back with the team.

Durant has been sidelined since Jan. 15 with a sprained left MCL.

“He’s on the court shooting, working through things, looking really good,” Nash said Saturday after the Nets’ shootaround. “There’s still a period of time he’s got to go through to get over the line, but really positive.”

The initial estimate was that Durant would miss four to six weeks.

“He’s been on the court for a week or so,” Nash said. “Now some of it is starting with spot shots, working his way up to more dynamic movement, but that’s the part of his rehab he’s in and he’s doing great.”

The Nets need him back for the home stretch of the season. They are 2-11 since he went out and have lost 10 straight. The Nets have fallen to eighth place in the Eastern Conference, 6 1/2 games behind the Miami Heat.

Durant, 33, will be returning to a new team. James Harden and Paul Millsap are gone, shipped away to the Philadelphia 76ers in a deal Thursday that brings Ben Simmons, Seth Curry and Andre Drummond – along with two first-round draft picks – to Brooklyn.

Nash said it was likely Curry and Drummond would make their debuts with the team on Monday night at home against the Sacramento Kings, but there was a chance they could play Saturday night in Miami.

Simmons did not play all season for the Philadelphia 76ers, disgruntled and requesting to be traded. It is unclear when Simmons will be ready to play.