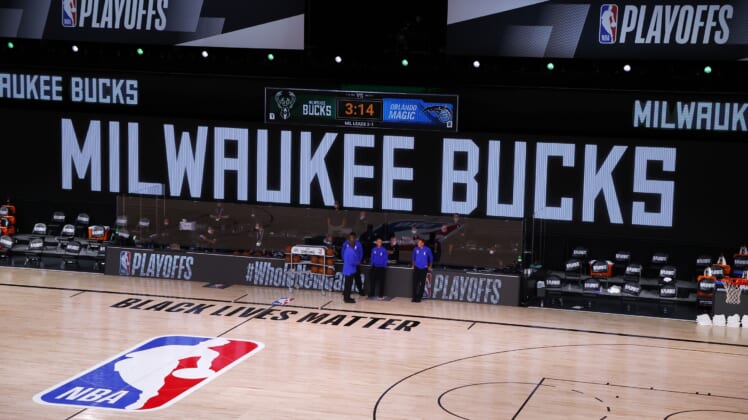 Aug 26, 2020; Lake Buena Vista, Florida, USA; Referees stand on an empty court before the start of a scheduled game between the Milwaukee Bucks and the Orlando Magic for Game Five of the Eastern Conference First Round during the 2020 NBA Playoffs at AdventHealth Arena at ESPN Wide World Of Sports Complex on August 26, 2020 in Lake Buena Vista, Florida. Mandatory Credit: Kevin C. Cox/Pool Photo-USA TODAY Sports

The Milwaukee Bucks took historic action on Wednesday night, refusing to take the court against the Orlando Magic and boycotting Game 5 of their NBA Playoff series.

Weeks after the NBA world came together with small actions to protest against police brutality and systemic injustice in the United States, Milwaukee’s players took their protest to an unprecedented step on Wednesday.

Minutes before the Bucks and Magic were scheduled to tip-off in the NBA’s Orlando bubble, none of Milwaukee’s players left the locker room. As time passed, with the Magic left waiting for their opponent, it became evident something significant was happening.

The NBA sent officials to Milwaukee’s locker room and a few moments later, the Magic and the game’s officials returned to their respective areas. As the buzzer sounded for Game 5 to begin, the court stood completely empty.

This moment comes just days after Jacob Blake was shot seven times in the back by law enforcement in Wisconsin. The video of the shooting spread across the country, leading to renewed outrage after months of protesting and calls for change following the murders of George Floyd and Breonna Taylor by police officers.

As a historic sports moment unfolded, the NBA world reacted as word broke that the Bucks were boycotting Game 5. It also may not be the only playoff boycott we see in the coming days.