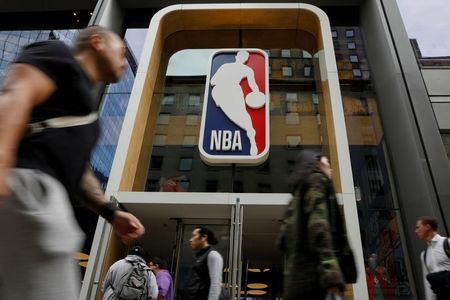 Final arguments are expected in the trial of former Minneapolis police officer Derek Chauvin, who is facing second and third-degree murder and second-degree manslaughter charges stemming from the death of George Floyd last May.

Chauvin was seen on video holding his knee on Floyd’s neck for more than nine minutes before the African-American man died. It brought out protests throughout the United States and led to pushback from those around the NBA relating to police brutality and racial inequality in the country.

With a verdict expected in Minneapolis this week and on the heels of another black man by the name of Daunte Wright being shot by an officer in the Minneapolis suburb of Brooklyn Center last week, the NBA is warning its teams. This includes preparing for postponements while taking other actions.

“The NBA has instructed teams to be vigilant about the impact of a potential verdict this week in the Derek Chauvin trial for the death of George Floyd in Minneapolis, including the possibility of game postponements,” ESPN’s Adrian Wojnarowski noted on Sunday.

It was just last week that the NBA’s Minnesota Timberwolves, NHL’s Minnesota Wild and MLB’s Minnesota Twins postponed games following the shooting death of the aforementioned Daunte Wright. That was out of respect to the deceased. But it was also done under the guise of expecting civil strife on the streets.

Following the death of Mr. Floyd back on May 25 of 2020, protests broke out throughout the United States. Every major city saw people take to the street to show their support for police reform and against police brutality.

As for the NBA, once the season resumed in the Orlando Bubble, things took a political turn. Black Lives Matter was the name of the game. And as more police brutality took place in American cities, NBA teams opted to boycott playoff games.

Depending on what happens this coming week and whether a verdict is reached in the Derek Chauvin trial, we could see more of this over the next week.