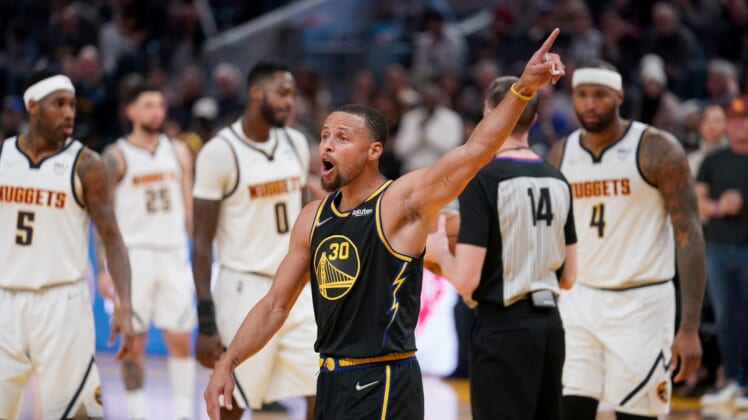 Jordan Poole exploded for 30 points as the Golden State Warriors rolled to an easy 123-107 victory over the Denver Nuggets on Saturday in the opening contest of their Western Conference first-round series at San Francisco.

Stephen Curry added 16 points in 22 minutes off the bench after missing the previous 12 games with a left foot injury. Curry’s timing was off as he finished 5-of-13 shooting in his first action since March 16. Klay Thompson scored 19 points.

Nikola Jokic registered 25 points, 10 rebounds and six assists for Denver. Will Barton added 24 points for the Nuggets, who didn’t play like the squad that won three of four regular-season outings against the Warriors.

Poole was 9-of-13 shooting — including 5 of 7 from 3-point range — as his point total tied Hall of Famer Mitch Richmond (1989) for the second-highest scoring playoff debut in Warriors’ history. Hall of Famer Wilt Chamberlain holds the record of 35 in 1960 for the Philadelphia Warriors.

Andrew Wiggins contributed 16 points and nine rebounds, and Draymond Green had 12 points, nine assists, six rebounds and three blocked shots for Golden State, which shot 52.4 percent from the field and was 16 of 35 from 3-point range.

Donovan Mitchell scored 32 points after a rough start and Bojan Bogdanovic had 26 as Utah took advantage of Luka Doncic’s absence to defeat host Dallas in the opening game of its Western Conference first-round series.

Rudy Gobert grabbed 17 rebounds and blocked three shots to lead the defensive effort for the Jazz, who took both a 1-0 lead and home-court advantage with the road win. Mitchell had a rough overall game from the field, shooting 10-for-29, and only scored two points in the first half before exploding for 30 in the second half.

Dallas played without its superstar Doncic, who was ruled out of Game 1 Saturday morning. He suffered a left calf strain in the regular-season finale Sunday against San Antonio. It’s uncertain whether he’ll be back for Game 2 on Monday. Jalen Brunson scored 24 and Spencer Dinwiddie tossed in 22 for the Mavericks.

Patrick Beverley and Jaden McDaniels hit late 3-pointers, capping a dominant performance by Minnesota from beyond the arc, as the seventh-seeded visitors stunned Memphis in Game 1 of their Western Conference first-round playoff series.

Anthony Edwards outscored Memphis star Ja Morant 36 to 32 and Karl-Anthony Towns chipped in with 29 of his own as the Timberwolves, who needed a play-in win over the Los Angeles Clippers just to make the playoffs, stole the home-court advantage in the best-of-seven matchup. Morant led the Grizzlies in scoring and assists with eight, but missed his only two 3-point attempts as second-seeded Memphis was outscored 48-21 on 3-pointers.

Already having demonstrated they could play with a 56-win club by splitting the four-game season series, the Timberwolves exploded out of the postseason gate for 41 points in the first quarter to go up by as many as 13. Edwards had 13 of his 36 points and Towns 12 of his 29 in the opening 12 minutes.

Tyrese Maxey poured in a postseason career-high 38 points and Philadelphia earned its first home win over Toronto this season in a romp in the opener of their Eastern Conference first-round playoff series.

Joel Embiid snatched a game-high 15 rebounds to complement 19 points, while James Harden dished off a game-high 14 assists while scoring 22 for the Sixers.

The fourth-seeded 76ers overpowered the Raptors, who had beaten them three times during the regular season, including twice in Philadelphia. Pascal Siakam paced Toronto with 24 points.