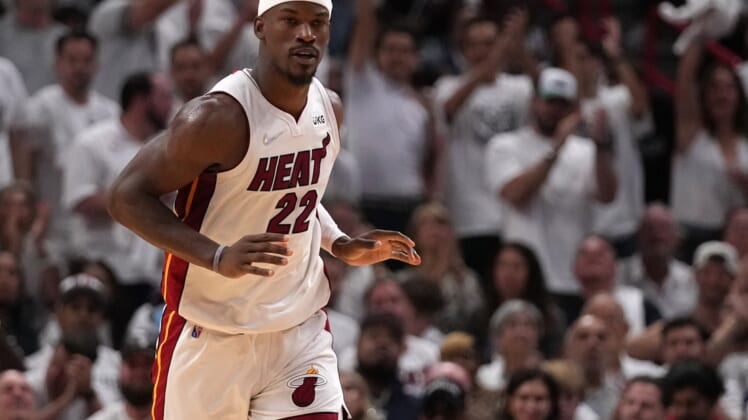 Brandon Ingram recorded 37 points, 11 rebounds and nine assists and the New Orleans Pelicans evened their first-round playoff series against the top-seeded Phoenix Suns at one game apiece with a solid 125-114 road triumph on Tuesday night.

CJ McCollum made six 3-pointers and had 23 points, nine assists and eight rebounds as the eighth-seeded Pelicans outplayed the powerful Suns.

Phoenix star Devin Booker scored 31 points but departed in the third quarter with a hamstring injury. Mikal Bridges tallied 19 points, and Chris Paul added 17 points and 14 assists but shot just 5-for-16 from the field.

Herbert Jones added 14 points and Larry Nance Jr. had 13 for New Orleans, which outscored Phoenix 69-53 in the second half. Jonas Valanciunas contributed 10 points and 13 rebounds for the Pelicans.

Jimmy Butler scored a career-playoff-high 45 points, including seven over a critical stretch in the fourth quarter, and Miami beat visiting Atlanta to take a 2-0 lead in an Eastern Conference first-round series.

Top-seeded Miami built a 16-point lead in the fourth quarter before eighth-seeded Atlanta battled back on the strength of Bogdan Bogdanovic’s playoff career-best 29 points, 19 of which he scored in the final period.

The Hawks were much more competitive in Tuesday’s Game 2 than in Sunday’s 115-91 defeat, thanks in part to an improved scoring effort from Trae Young. The star guard scored just eight points in Game 1, a mark he passed by the end of the first quarter on Tuesday. Young went into halftime with 18 points, but Miami held him to just seven in the second half.

Ja Morant had 23 points, nine rebounds and 10 assists as Memphis coasted to a win over visiting Minnesota in Game 2 of their Western Conference quarterfinal series.

Anthony Edwards led Minnesota with 20 points. Karl-Anthony Towns registered 15 points and 11 rebounds for the Timberwolves, who shot 39.5 percent (30 of 76) from the field.