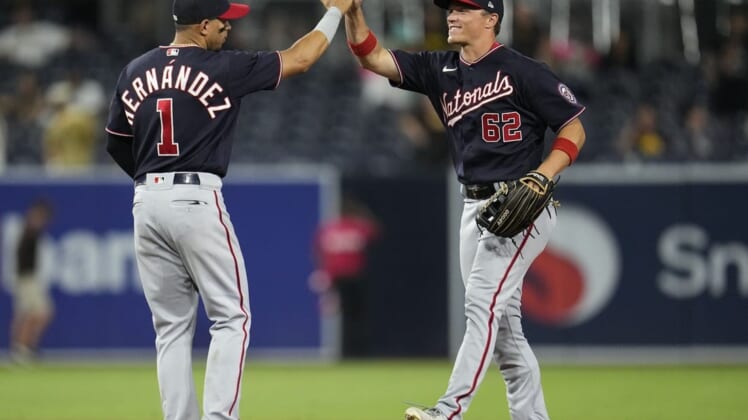 The big blow was a two-run homer by Alex Call, the first long ball of his career. but Hader’s fifth appearance as a Padre had already fallen apart by then.

Entering the game with the score tied, Hader walked the first hitter he faced, Victor Robles. Lane Thomas then topped a ball between the mound and the third base line. Hader fielded it then threw wildly to first, and Robles scoring on what turned out to be a three-base error.

Call then homered into the left field seats for the first two RBIs of his career in his 18th major league game.

Erasmo Ramirez (4-1) threw one scoreless inning for the win. Kyle Finnegan tossed a 1-2-3 ninth for his second save in as many nights against the Padres, his seventh of the season.

Hader (2-5) took the loss. Since the Padres acquired the four-time All-Star from the Milwaukee Brewers, he is 1-1 with a blown save and a 16.20 ERA.

Four innings earlier, Manny Machado erased a 3-1 Nationals lead with a two-run double that fell just short of being a home run.

The Padres took a 1-0 lead in the second against Nationals starter Paolo Espino on singles by Brandon Drury, Jake Cronenworth (bunt) and Trent Grisham.

The Nationals scored two in the fourth and one in the fifth against Padres left-hander Blake Snell, who started one day after being involved in a non-injury car accident en route home from the ballpark. His car was sideswiped by another vehicle when Snell was parked.

Former Padre CJ Abrams, who went to the Nationals in the deal that brought Juan Soto and Josh Bell to San Diego, put Washington ahead with a two-run, two-out, opposite-field single in the fourth. Keibert Ruiz and Cesar Hernandez had back-to-back, one-out singles, then worked a double steal to set up Abrams.

In the fifth, Joey Meneses, Nelson Cruz and Ruiz had three consecutive two-out singles to produce a run.

After Espino issued back-to-back walks to Jurickson Profar and Soto with one out in the fifth, Machado greeted reliever Victor Arano with a game-tying, two-run double off the wall in right-center. However, Arano froze Machado at second, striking out Drury and Cronenworth.