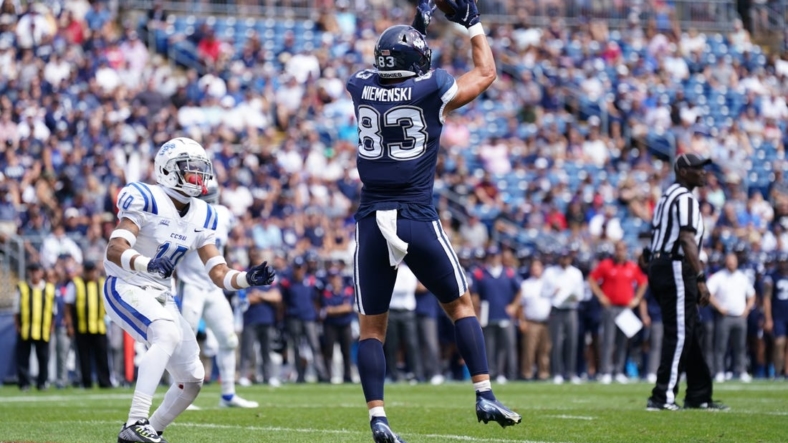 Nate Carter rushed for over 100 yards for the second straight week and Connecticut overcame a slow start to post a 28-3 victory over Central Connecticut State on Saturday afternoon at East Hartford, Conn.

With 123 yards, it was the fourth tripl- digit rushing game of the career for Carter, a sophomore who rushed for 190 yards in the opening loss at Utah State last Saturday.

The victory was the first at UConn for new head coach Jim Mora Jr., who took over the Huskies program this season.

Quarterback Zion Turner was 14-of-22 passing for 172 yards and two touchdowns in his first collegiate start as the Huskies (1-1) broke open a tight, mistake-riddled contest with three second-half touchdowns.

In addition to Turner’s scoring strikes of 11 yards to Brandon Niemenski in the first half and 10 yards to Jacob Flynn in the fourth quarter, Carter and freshman Victor Rosa had rushing touchdowns of 17 and 11 yards, respectively in the second half.

Each team had field-goal attempts blocked and the Blue Devils (0-1) missed a short attempt when trailing by just 7-3 after driving for a first down at UConn’s 2-yard line to start the second half.

The Huskies had three turnovers, including an end zone interception in the closing seconds of the first half. They were penalized eight times for 55 yards.

Romelo Williams was 15-of-28 passing with 134 yards and an interception for CCSU. Malik Thomas led the Blue Devils in rushing with 63 yards.

After a scoreless opening quarter, the Blue Devils broke the ice early in the second with Cristiano Rosa’s 28-yard kick less than four minutes into the second period.

In response to the 3-0 deficit, the UConn drove 80 yards on 11 plays with Turner capping the drive with an 11-yard touchdown strike to Niemenski.