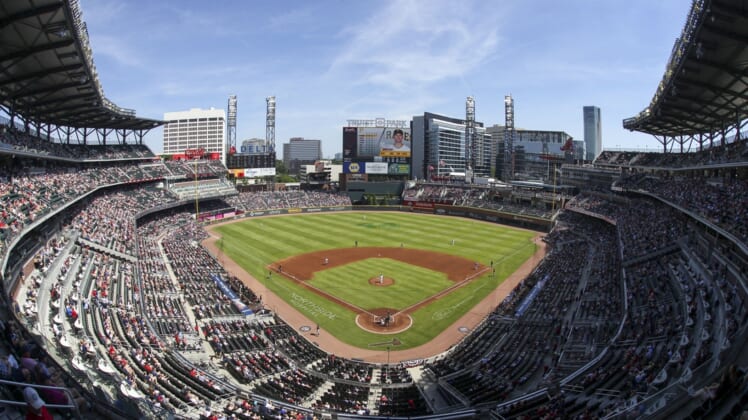 May 22, 2021; Atlanta, Georgia, USA; General view of Truist Park in the first inning of a game between the Atlanta Braves and Pittsburgh Pirates. Mandatory Credit: Brett Davis-USA TODAY Sports

Major League Baseball issued a strong response Tuesday to a lawsuit seeking to force the return of the 2021 All-Star Game to Atlanta, terming the legal action “frivolous.”

Alleging that MLB and the players union “plotted, coordinated, and executed a common plan and conspiracy to cancel the All-Star Game in Atlanta with the intent to injure and deprive residents and businesses of Atlanta, Georgia of their Constitutional rights,” JCN is seeking $100 million-plus in compensatory damages and $1 billion in punitive damages.

Baseball announced earlier this year that it was moving the All-Star festivities to Colorado after Georgia enacted a controversial voting law.

MLB’s legal response Tuesday read in part: “JCN has been vocal in opposing MLB’s decision, but that does not give it a basis for federal civil rights claims. Moreover, despite its claims of exigency, JCN spent the last two months putting up billboards in Times Square and running inflammatory advertisements in The New York Times.

“When its publicity campaign had no effect, JCN decided to sue, but this Court’s time should not be wasted on political theatrics.”

MLB added that JCN has no legal standing to tell a private company where it can choose to operate.

The MLB Players Association wrote in its legal response that it has no say in where the All-Star Game is held. The union added that JCN “filed this lawsuit for political theater and then doubled down on abuse of the judicial process by dragging the MLBPA and its Executive Director … into a frivolous lawsuit. …

“It is in the public interest for Defendants’ decision to move the All-Star Game to Denver to be upheld, thereby protecting Defendants’ right to demonstrate their values and preserving their freedom as private entities to determine where to hold their events.”