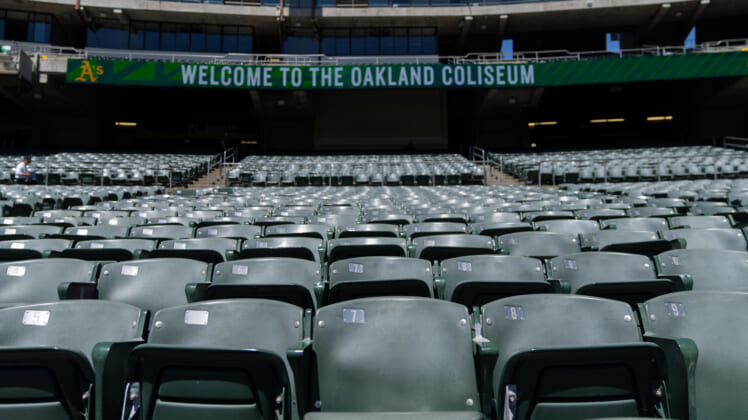 Ahead of this year’s All-Star Game, MLB commissioner Rob Manfred took a major swipe at the Oakland Athletics stadium, RingCentral Coliseum, and how it is a subpar major league baseball venue.

There are many facts about California professional baseball. The Los Angeles Dodgers are willing to spend anything to win a championship. The San Francisco Giants manage to always stay competitive. Mike Trout is cursed by being the best player in baseball and on a consistently bad team, and the Oakland A’s are cheapskates.

The latter was a truth immortalized in the fantastic baseball film Money Ball. That strategy has only been emboldened by the fact that the team has actually had seven more winning seasons since 2010. Nevertheless, the team’s venue has been a laughing stock over the last couple of decades.

Not just because it opened in 1966 and is not a landmark arena like Fenway Park in Boston or Wrigley Field in Chicago, but it really hasn’t received any serious upgrades to make it somewhat of an enjoyable experience for fans.

In June of this year, issues like “feces from feral cats, a moth infestation, mold, a nearby homeless encampment, broken seats, and plumbing and water leaks all made the checklist of problems” that were sent to Coliseum Authority Executive Director Henry Gardner in a letter on May 12 (via Ballpark Digest).

It seems that the arena’s reputation has reached as high as the commissioner’s office, and Rob Manfred took a moment to take a shot at RingCentral Coliseum and the need for the A’s to upgrade their home. USA Today MLB writer Bob Nightengale noted it on Twitter during Manfred’s media scrum on Tuesday before tonight’s game.

There are plans for a new waterfront stadium that passed a major vote in June and is expected to open after the 2024 season.