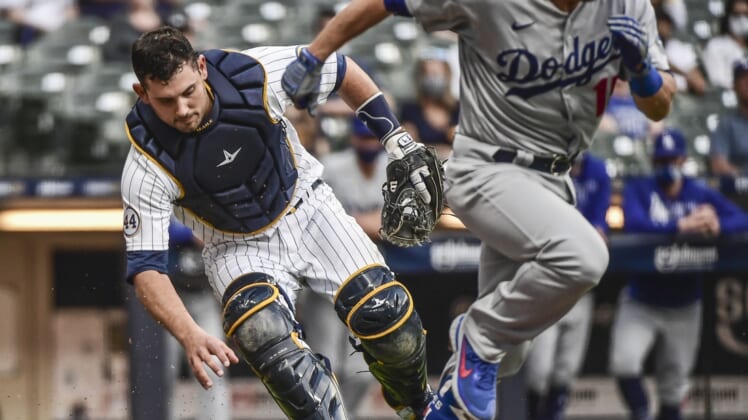 After Will Smith’s two-run triple put Los Angeles up 5-3 in the 11th, the Brewers loaded the bases with nobody out in the bottom of the frame. Kolten Wong delivered a sacrifice fly and Avisail Garcia smacked a tying single with two out. Then Shaw, who homered earlier in the contest, lined a shot to right field off Mitch White, the Dodgers’ 10th pitcher of the night, to cap the comeback and send Milwaukee to its ninth victory in 12 games.

Mookie Betts (two hits) homered off Brewers ace Brandon Woodruff on the first pitch of the game, but Los Angeles failed to hold three one-run leads and that two-run edge in the 11th. The Dodgers not only fell for the 10th time in 13th games, but lost promising starting pitcher Dustin May to what the club called only a “right arm injury.”

One batter after Milwaukee’s Luis Urias homered to tie the game at 1-1 in the second, May tossed his 27th pitch to Billy McKinney. He then grimaced and quickly motioned to the Los Angeles dugout. The 23-year-old May, who entered the game with a 2.53 ERA this season, retired the first five Brewers he faced — three on strikeouts — before Urias went deep.

Los Angeles got the lead back in the third on Corey Seager’s RBI triple off the center-field wall. Milwaukee tied it again, though, on Shaw’s long solo homer off Garrett Cleavinger, who replaced May, in the third.

Justin Turner’s RBI single in the 10th gave the Dodgers a 3-2 lead, but Urias’ sacrifice fly with the bases loaded tied the game in the bottom of the frame.

Woodruff, owner of a 1.80 ERA, allowed two runs and struck out six with a walk over six innings.