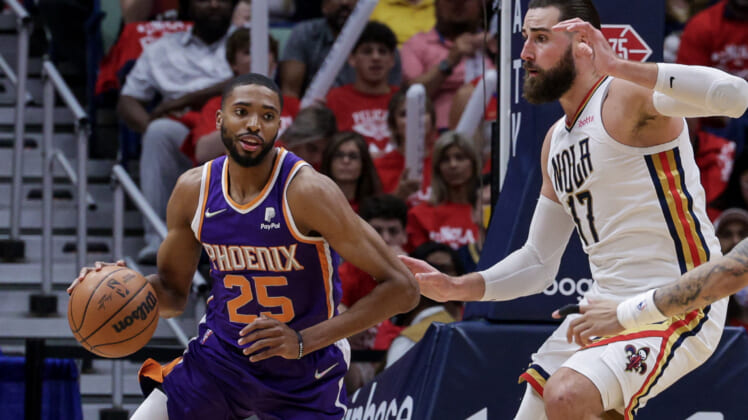 Mikal Bridges and the Phoenix Suns ended the 2021-22 NBA season with a disappointing and short playoff run. Although they did manage to set a new record in season wins, it was still humiliating to see how the Dallas Mavericks dismantled the top-seeded team in Game 7 of the conference semifinals.

Their style of play allowed them to finish the season at the top when it comes to the margin of victory across the league. The balanced play style of Suns’ head coach Monty Williams proved to be effective even when they didn’t have key players on the floor. This became obvious in their matchup against the Boston Celtics back in December. Phoenix didn’t have starters Devin Booker and Deandre Ayton, who are both vital to the squad’s offense.

With their stellar season as a team, some players stood out for the Suns which helped them become a Western Conference threat. One of those players is defensive-minded forward Mikal Bridges. People are starting to notice how special of a player Bridges is. However, there’s still room for improvement for the young star.

Mikal Bridges must prove that he’s worth his contract extension

Before the start of the 2021-22 season, the Suns didn’t hesitate to reward their young player with a rookie contract extension. The Suns gave him a four-year, $90 million extension that runs through the 2025-26 season. A ton of people didn’t question the deal. Instead, they publicly showed their support for Bridges.

It’s no question that Bridges deserves the extension that the Suns gave him. Over the past few seasons, he has proven that he is reliable and can be dependable when needed. Since getting drafted by Phoenix back in 2018, Bridges has not missed a single game in a season.

It’s a rare feat nowadays, considering there are a handful of players who choose to sit a few games to rest. And when he’s on the floor for extended minutes, he doesn’t just jog or run all over the court. Mikal Bridges plays hard. In fact, he ended last season as the league leader in minutes player with 2,854.

When Mikal Bridges was given the extension, it was clear that the front office values him more outside of their stars, Booker and Chris Paul. During the first year of his contract extension, the former 10th overall pick balled out on the defensive end. Looking at the advanced stats, he finished ninth overall across the league in defensive win shares. This was enough for him to finish second in the NBA Defensive Player of the Year race behind Boston Celtics guard Marcus Smart.

With his impressive defensive dominance, his offensive numbers suffered quite a bit. It’s not a huge difference, but it’s apparent that he’s locked in on defense more. His numbers from the 2020-21 campaign were somewhat close to the stats he finished with this past season. A huge difference that can easily noticed is his three-point percentage. Compared to his 42% the past two seasons, Bridges ended his 2021-22 campaign at 37%. One could point out that he attempted less shots from outside, which is true.

Ultimately, his numbers over the past two seasons have shown little improvement. I get it, he’s more focused on the defensive end. But he should show more consistency on offense. Everyone already knows what Bridges is capable of on the defensive end. It’s time to show that he can take on more offensive responsibilities.

Given how the team is constructed, the Suns will ask more from Bridges on offense. He’s already incorporated to their offense, he just needs to get more plays called for him, to get the defense off of the backcourt tandem of Paul and Booker. Additionally, Paul isn’t getting any younger. Although he may look like he still has a lot left in the tank, no one knows what can happen.

Mikal Bridges needs to hone his offense and become a legitimate two-way threat for the Suns. That’s what they need to win the championship.