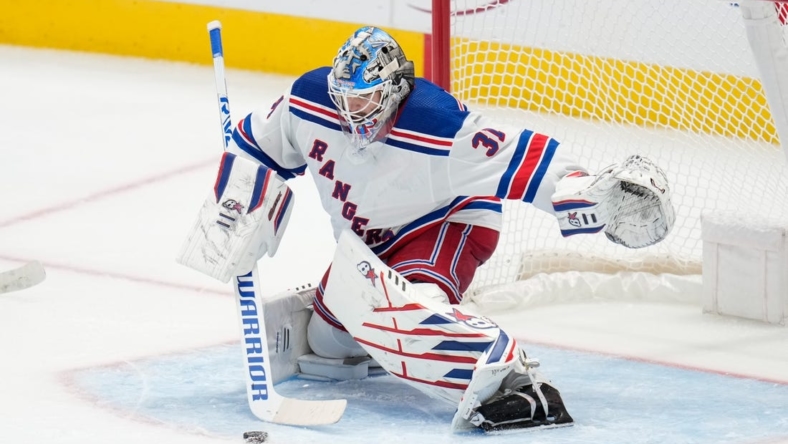 Mika Zibanejad continued his hot start by scoring the tiebreaking power-play goal with 7:04 remaining in the third period as the New York Rangers beat the Arizona Coyotes 3-2 on Sunday night in Tempe, Ariz.

Zibanejad scored his sixth goal of the season, and fifth on the power play, 27 seconds into New York’s second man advantage.

The Rangers quickly moved the puck and Zibanejad ended the sequence by getting it from Chris Kreider and lifting a wrist shot from the left side below the faceoff circle over Connor Ingram before the goaltender could fully get over to stop the shot.

New York star Artemi Panarin celebrated his 31st birthday by collecting a goal and two assists to increase his total to 16 points.

Alexis Lafreniere also scored for the Rangers, who won their second straight following a four-game losing streak and improved to 12-1-2 in the past 15 meetings with Arizona.

Panarin set up New York’s first goal by sliding the puck from the left side under defenseman Josh Brown to Lafreniere. As he warded off a check by Shayne Gostisbehere, Lafreniere crashed the net and deflected the pass into the vacated right of the net for a 1-0 lead 91 seconds into the second.

A little over five minutes later, Guenther spotted Crouse and fed him the puck behind the net for a one-timer over Shesterkin.

Arizona then took a 2-1 lead with 8:33 remaining in the second on a fluky play.

Ryan Lindgren appeared to gain control of Bjugstad’s rebound but could not maintain possession. The puck hopped over the New York defenseman’s stick and caromed off his left skate. Bjugstad gained possession before lifting a backhander from the doorstep over Shesterkin.

New York tied it with 1:53 left in the second when Panarin leaned into Gostisbehere and released a wrist shot from the lower edge of the left faceoff circle. The shot hit the goalpost and Ingram’s arm before going in.