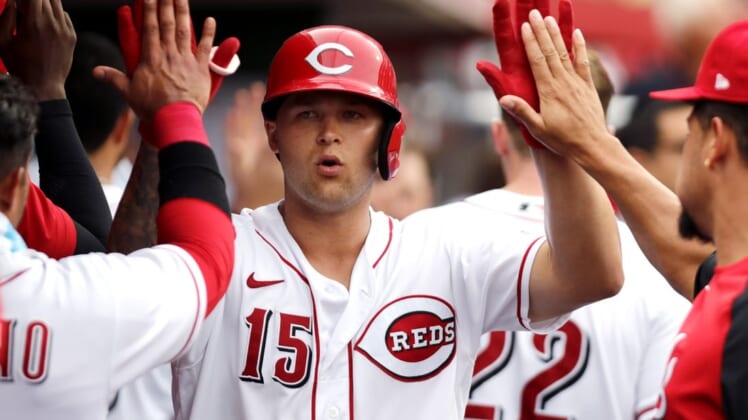 Brandon Nimmo capped a five-run 10th inning with a three-run homer Wednesday night, propelling the New York Mets, who had rallied in the ninth to tie the score, to an 8-3 triumph over the host Cincinnati Reds.

In winning for the second time in three days in Cincinnati, the Mets grabbed a 1-0 advantage in the first, lost it on a two-run homer by Nick Senzel in the second, and never led again until the 10th.

Dominic Smith ignited the big 10th with a one-out double, his second of the game, to score automatic runner Ender Inciarte.

James McCann also jumped on Dauri Moreta (0-2), the Reds’ fifth pitcher, for an RBI single before Nimmo launched his seventh homer of the season with two aboard.

Adam Ottavino (3-2) was credited with the win after retiring the Reds in order in the ninth to retain a 3-3 tie. Edwin Diaz worked the 10th in a non-save situation.

Trailing 3-2 after managing just two runs on 11 hits, the Mets finally got the timely hit they needed with one out in the ninth when Starling Marte doubled home Nimmo, who had singled.

After blowing the save, Hunter Strickland prevented further damage by retiring the next two batters with Marte in scoring position, including Pete Alonso, who had been 4-for-4 before fouling out to the catcher.

Senzel’s homer was his third of the season and followed a one-out walk drawn by Matt Reynolds.

The Reds completed their scoring in the third when Brandon Drury singled, stole second, took third on a wild pitch and jogged home on a ground-rule double by Kyle Farmer.

The Mets got back within one in the fourth when Tomas Nido singled in Smith, who had doubled.

Reds starter Graham Ashcraft left with a 3-2 lead after allowing two runs on 10 hits in six innings. He struck out one and did not walk a batter.

The Mets’ David Peterson didn’t get out of the fourth inning, charged with three runs on four hits in 3 2/3 innings. He walked five and struck out seven.

Senzel and Drury each had two hits for the Reds, who were outhit 16-5.