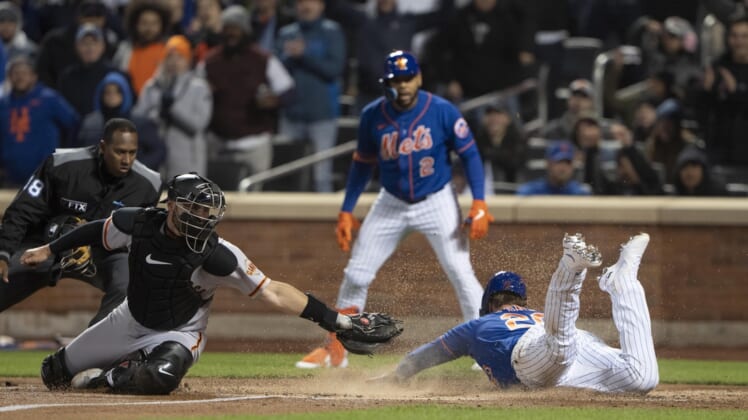 Max Scherzer carried a no-hitter into the sixth inning in his home debut for the Mets Tuesday night, combining with two relievers on a two-hitter as New York beat the San Francisco Giants 3-1 to complete a doubleheader sweep.

Francisco Lindor’s RBI single in the 10th inning lifted the Mets to a 5-4 win in the opener. New York overcame a 4-1 third-inning deficit.

Scherzer (3-0), who signed a three-year deal worth $130 million just before the lockout, issued one walk through the first five innings and struck out Jason Vosler and Curt Casali to open the sixth. The ace right-hander then issued consecutive walks to Mike Yastrzemski and Brandon Belt before Darin Ruf hit a clean single to left to score Yastrzemski and end Scherzer’s bid for his third career no-hitter and first since his gem against the Mets as a member of the Washington Nationals at Citi Field on Oct. 3, 2015.

Scherzer retired the final four batters he faced to become the first Mets starter this year to last at least seven innings. He walked three and struck out 10 and has not suffered a loss in 22 straight regular-season starts dating back to last May 30.

Drew Smith allowed one hit in the eighth before Trevor May threw a perfect ninth for his first save.

The Mets scored all their runs in the third as they snapped Logan Webb’s own streak of consecutive regular-season starts without a loss at 22 straight. Lindor doubled with one out and Pete Alonso walked with two outs before Eduardo Escobar laced a two-run double down the first base line. Dominic Smith followed with an RBI single.

Escobar, Lindor and Dominic Smith all had two hits in the nightcap.

Webb (1-1) allowed six hits and three walks while striking out one over 3 2/3 innings.