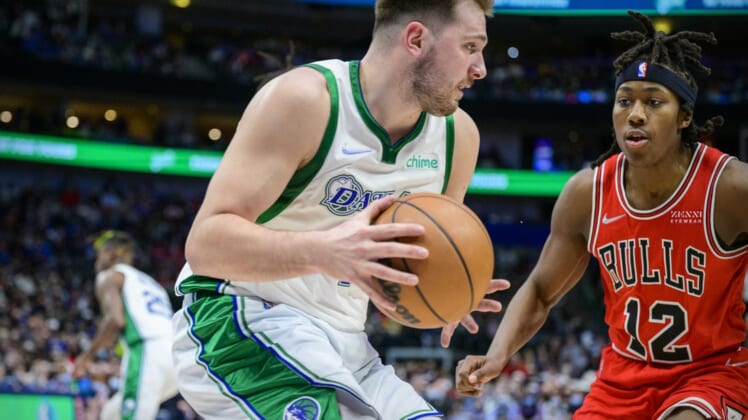 Luka Doncic recorded a triple-double of 22 points, 14 rebounds and 14 assists, and the Dallas Mavericks extended their winning streak to six games while snapping the Chicago Bulls’ streak of nine games, 113-99, Sunday in Dallas.

A back-and-forth contest through the first three quarters, the Mavericks went on a 19-9 run to open the fourth quarter. That gave Dallas a double-digit-point lead it held the rest of the way and extended to as many as 18 points down the stretch.

All five Mavericks starters scored in double-figures, led by Doncic. Maxi Kleber and Dorian Finney-Smith scored all 18 and 12 of their points on 6-of-9 and 4-of-7 shooting from 3-point range, keying Dallas’ 16-of-36 performance beyond the arc.

Jalen Brunson added 17 points and Dwight Powell scored 10. Josh Green shot 8-of-10 from the floor off the bench for 18 points.

Chicago scored at least 102 points in every game during its winning streak, but Dallas held the Bulls to just 39-of-90 shooting from the floor Sunday to keep them in double-digits scoring for the first time since Dec. 11.

For the Mavericks, it was the fifth time during their six-game winning streak and sixth time in the last seven games they held an opponent to fewer than 100 points.

Zach LaVine and DeMar DeRozan led Chicago with 20 points apiece, but Dallas held LaVine to 7-of-21 shooting. Nikola Vucevic went just 6-of-17 from the floor for 13 points, and Coby White was held to 1-of-4 shooting from 3-point range on a 13-point night.

Lonzo Ball was the only Bull to make more than two 3-pointers, but he finished with just nine points on 3-of-6 shooting from deep. He added six rebounds and five assists. DeRozan led Chicago with eight assists.

The Bulls built a lead of as many as 11 points in the first half before going cold in the second. They went 18-of-43 from the field after intermission to the Mavericks’ 21-of-40 shooting.