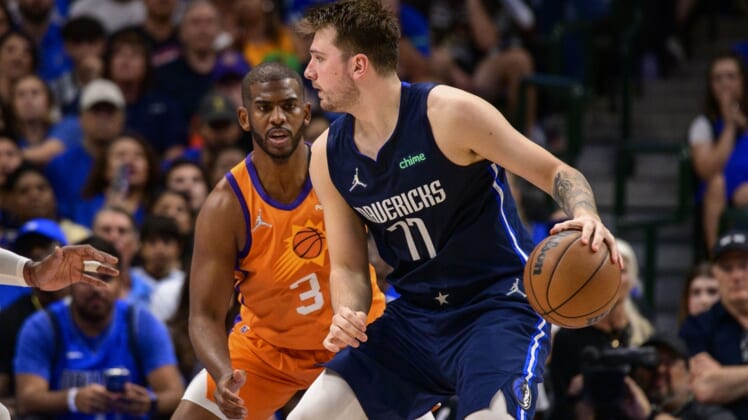 Luka Doncic had a double-double and Dorian Finney-Smith led a 3-point shooting barrage as the host Dallas Mavericks defeated the visiting Phoenix Suns 111-101 on Sunday to even their Western Conference semifinal series 2-2.

Doncic had 26 points and 11 assists and Finney-Smith scored 24 points, making 8 of 12 3-pointers as the Mavericks finished 20 of 44 from beyond the arc. Jalen Brunson scored 18 points, Davis Bertans scored 12, Maxi Kleber had 11 and Spencer Dinwiddie had 10.

Devin Booker scored 35 points, Jae Crowder had 15, Deandre Ayton added 14 and 11 rebounds and Cameron Johnson scored 11 to lead the Suns, who made 9 of 25 3-pointers.

Game 5 will be Tuesday night in Phoenix.

The Mavericks led 87-78 when Paul returned to the game with five fouls and 10:28 remaining. The lead was still eight when Paul fouled out a minute and a half later.

Mikal Bridges’ basket got Phoenix within six points before Finney-Smith made consecutive 3-pointers to complete an 8-0 run that gave Dallas a 97-83 lead midway through the fourth quarter.

Dallas led by seven points when Paul went to the bench after committing his fifth foul with 9:32 left in the third quarter. Shortly after Paul’s departure, the Mavericks scored seven straight points for a 75-63 lead.

Booker scored six points to help Phoenix trim the lead to four, but Dallas scored the last five points to push the lead to 87-78 at the end of the quarter.

Finney-Smith and Bertans each made two 3-pointers as the Mavericks turned a 19-13 lead into a 37-25 advantage at the end of the first quarter.

Bertans made consecutive 3-pointers and Dinwiddie added another as they built a 46-29 lead.

Crowder made back-to-back 3-pointers and Paul added five points as Phoenix closed within 54-48.

Doncic made seven free throws as Dallas rebuilt the lead to 68-56 at halftime. His last two free throws came after Paul committed his fourth foul with one second left.