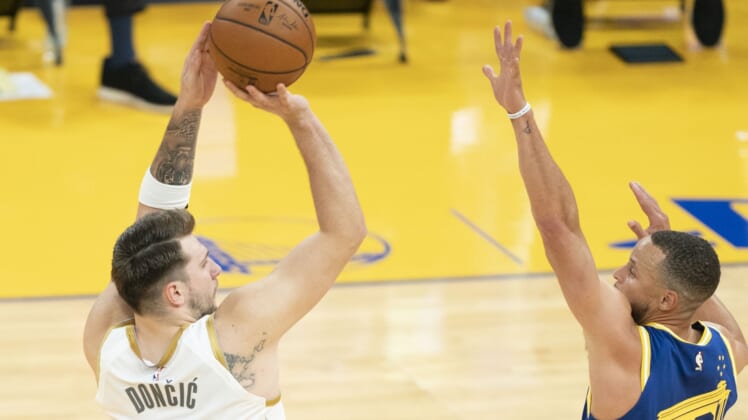 Luka Doncic outscored Stephen Curry for the first time in five career head-to-heads and Dallas ran off 28 consecutive points bridging the first and second quarters as the Mavericks pounded the Golden State Warriors 133-103 on Tuesday night.

Doncic had a game-high 39 points on the second half of a back-to-back, helping the Mavericks (34-27) win the season series 2-1 over the Warriors (31-31) and go 3 1/2 games up in their duel for playoff position in the Western Conference.

The blowout was Dallas’ third straight in the two-year history of San Francisco’s Chase Center. The Mavericks, who have never lost in the building, blitzed the Warriors by 20 and 27 points last season.

Curry, who had scored 57 points the last time the teams met in Dallas in February, finished with a team-high 27. He shot 5-for-9 on 3-pointers, while his teammates combined to go 11-for-34.

Curry’s second 3-pointer of the game gave the Warriors, seeking a third straight win, a 12-11 lead in the fourth minute before the Mavericks began their total domination at both ends of the court.

Tim Hardaway Jr. hit a pair of 3-pointers among 11 points and Dallas shot 5-for-7 on 3-pointers in the first quarter, during which the Mavericks ran off to a 36-12 lead.

Jalen Brunson added a sixth 3-pointer to increase the margin to 27 before Jordan Poole ended a 9:40 Golden State drought with a trey, just the Warriors’ fifth hoop of the game’s first 13 minutes.

The nationally televised game was never competitive after Golden State drought, with Dallas extending its lead to 62-29 by halftime before both teams emptied the bench in the second half.

Mychal Mulder added 26 points, Andrew Wiggins 15, and Poole and Kelly Oubre Jr. 10 apiece for Golden State, which was held to season-lows for a quarter (12 in the first) and a half (29 in the first).

The Warriors had put up 147 and 132 points while splitting their first two meetings with the Mavericks in Dallas.