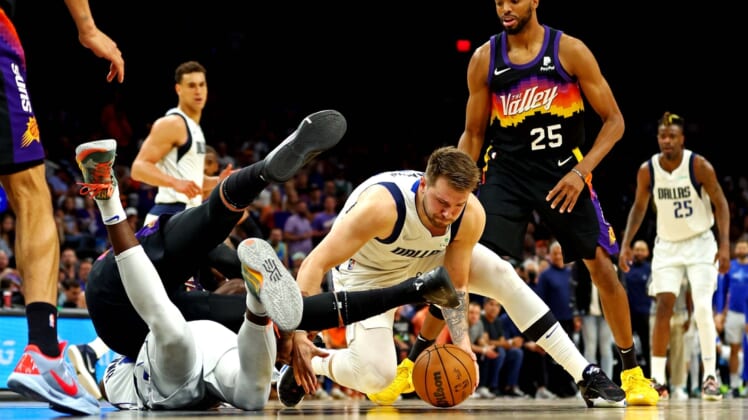 Luka Doncic recorded 35 points and 10 rebounds and the Dallas Mavericks dismantled the host Phoenix Suns with a convincing 123-90 victory in Game 7 to claim a spot in the Western Conference finals.

Spencer Dinwiddie poured in 30 points off the bench and Jalen Brunson added 24 as fourth-seeded Dallas steamrolled the top-seeded Suns. The Mavericks led by as many as 46 points while reaching the finals in the West for the first time since winning the 2011 NBA Finals.

Dallas will face the third-seeded Golden State Warriors in the conference finals. Game 1 is Wednesday night in San Francisco.

Devin Booker scored 11 points on 3-of-14 shooting in his first career Game 7 for the Suns, who won an NBA-best 64 games. That output also set a franchise record.

Booker missed his first nine field-goal attempts before sinking a jumper with five minutes left in the third quarter.

Starting anchors Booker, Chris Paul (10 points, 4-of-8 shooting) and Deandre Ayton (five points, 2-for-5) totaled 26 points on combined 9-of-27 shooting. Overall, Phoenix shot 37.9 percent from the field, including 12 of 34 from behind the arc.

The Mavericks were the first road team to win in the seven-game series. Dallas lost its first three visits to Phoenix by an average of 19 points, including a dismal 110-80 setback in Game 5.

After falling behind 2-0 and 3-2 in the series, Dallas won the final two games by an average of 30 points.

The Mavericks shot 56.8 percent from the field and made 19 of 39 from 3-point range in the wire-to-wire victory. Doncic was 6 of 11 from behind the arc and Dinwiddie made 5 of 7.

The home fans booed the Suns off the court at halftime when the score was 57-27. Phoenix’s halftime total matched the output of Doncic, who was 9 of 12, including 4 of 7 from 3-point range.

Doncic scored 12 points in the first quarter as the Mavericks built a 27-17 lead.

Doncic (15) and Dinwiddie (13) combined for 28 points in the second quarter as Dallas outscored Phoenix 30-10.

Dinwiddie’s final 3-pointer, coming with 48.3 seconds left in the stanza, gave the Mavericks a 92-50 lead and they remained well ahead in the fourth quarter while finishing the startling wipeout win.