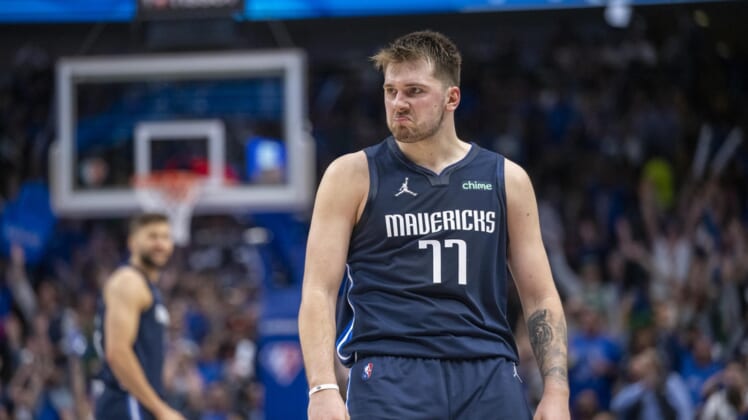 The Utah Jazz are on the brink of elimination and are uncertain whether their star player is going to play in Game 6 on Thursday night at Salt Lake City.

Despite having their star player performing at his peak again after missing a few games in this first-round series, the Dallas Mavericks know that having a 3-2 lead doesn’t guarantee they will advance.

Last year’s postseason disaster offers a reminder. In the 2021 first round, the Mavericks were up 3-2 against the Los Angeles Clippers before losing Game 6 at home and Game 7 on the road.

Dallas did that in Game 3, winning 126-118 at Utah to regain home-court advantage after losing Game 1 at home 99-93. Things are vastly different a week later.

Mavericks star Luka Doncic has been dominant since returning from a calf injury that sidelined him for the first three games. And the Jazz are uncertain whether their most explosive scorer, Donovan Mitchell, will be able to play Thursday night because of a leg injury.

This series has been so unpredictable, with Jalen Brunson suddenly playing like an All-Star, the usually sharpshooting Jazz misfiring from deep at historic levels and elite players from each team with injuries.

Mitchell limped off the court and grabbed at his hamstring with 4:55 to play Monday. An ensuing MRI was negative, and Mitchell is optimistic he’ll play through his bilateral quadriceps contusions saying, “I’ll be fine.”

Mitchell also believes the Jazz will return to form after only hitting 3 of 30 from 3-point range in the 102-77 Game 5 blowout loss.

“I don’t think we’ve ever shot this poorly as a group,” Mitchell said. “So, we’ll bounce back and go from there.”

The way Dallas has played for most of this series will require a very large bounce-back by Utah.

Doncic pushed the Mavericks into the series lead with 33 points and 13 rebounds in Game 5 after totaling 30 points, 10 rebounds and four assists in the 100-99 Game 4 loss at Utah.

Dallas is looking to get past the first round for the first time since winning the NBA championship in 2011. That Clippers series last year was the first time in nine occasions that the Mavs blew a 3-2 lead.

Doncic said the Mavericks just need to play like they did Monday.

“I think our defense was amazing, the energy was high and we played hard,” he said. “That’s the way we’ve got to play, and that’s how we win the next game.”

If not, Game 7 will take place Saturday at Dallas.