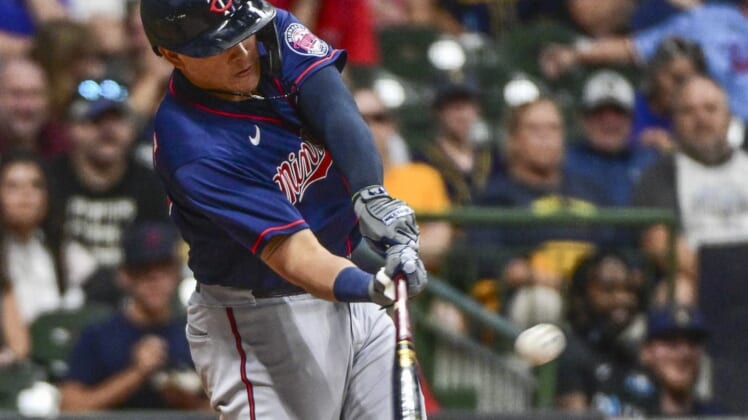 Luis Urias delivered a game-ending, bases-loaded sacrifice fly in the ninth inning and the Milwaukee Brewers outlasted the visiting Minnesota Twins for a 7-6 victory on Tuesday night.

Urias produced his second walk-off RBI since the All-Star break. He also homered on Tuesday and collected a season-high three hits. The third baseman’s big night came on the same day his brother Ramon Urias homered for the Baltimore Orioles against the Tampa Bay Rays.

Urias then lifted a fly ball near the foul line in right field. The ball was hit far enough for McCutchen to easily score on a headfirst slide well ahead of right fielder Alex Kirilloff’s throw.

The Brewers won for the fourth time in five games and rebounded from getting blanked 2-0 by the Colorado Rockies on Monday. Milwaukee posted its fifth walk-off win of the season.

Josh Hader (1-4), who had allowed 10 runs in his previous four outings, easily retired Byron Buxton, Carlos Correa and Jorge Polanco in the top of the ninth.

Urias delivered after Willy Adames struck out with the bases loaded to end the eighth against Jhoan Duran.

Renfroe hit a three-run homer in a four-run second and Urias socked a solo shot that gave Milwaukee a 5-3 lead in the third. Milwaukee’s Kolten Wong hit a tying solo drive in the fifth off Joe Smith, and Christian Yelich contributed an RBI double.

Minnesota’s Byron Buxton returned from resting his right knee in the two-game weekend series at Detroit and hit a leadoff homer. Gio Urshela hit a three-run drive off Trevor Gott in the fifth that gave Minnesota a brief 6-5 lead.

Jose Miranda also contributed an RBI double for the Twins, who had won three of their previous four games.