With an 11 under par total of 129 strokes through two rounds at the 2021 Open Championship, Louis Oosthuizen has broken the 36-hole scoring record at golf’s oldest championship.

Oosthuizen made his first and only bogey in that stretch on the par-3 16th hole on Friday, but made a gutsy par save on the next hole en route to a five-under round of 65 to back up his opening 64.

Scoring conditions were ideal at Royal St George’s in Sandwich, Kent, England. Despite the fairways lending to unpredictable bounces and the rough posing a serious challenge, Oosthuizen put on an absolute clinic off the tee to build a two-stroke lead over Collin Morikawa.

When there isn’t wind howling at this venue, it lends itself to pretty low scores. Oosthuizen got particularly hot on the back nine in Round 2, birdieing Nos. 12 and 13 before an eagle at the par-5 14th.

If he keeps up his elite form from tee to green and holes some timely putts, Oosthuizen will be lifting the Claret Jug on Sunday for the second time. We’ve seen dominant form from Oosthuizen at The Open before, as he won in 2010 at St. Andrews by seven strokes. 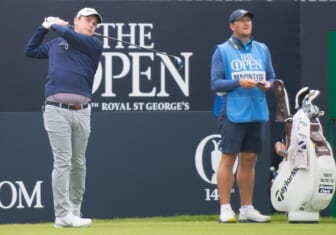 Also Read:
Golfers warned about breaching protocols at The Open