In a moment with some eery similarities to the Damar Hamlin incident earlier this week, Los Angeles Rams rookie Russ Yeast was sent to the hospital on Sunday after suffering a serious injury to his chest.

The events of the Week 17 “Monday Night Football” game between the Buffalo Bills and Cincinnati Bengals made national headlines. Second-year player Damar Hamlin suffered a serious blow to his chest while making a tackle on Bengals wide receiver Tee Higgins. The hit is believed to have caused Commotio Cordis and sent the defensive back into cardiac arrest.

Few will be able to forget the image of the field at Paycor Stadium being filled with players and an ambulance entering it to take Hamlin to the hospital after needing to be resuscitated. Fortunately for him, after being in intensive care for several days, his health has remarkably improved and he is likely to return to a normal life after the near-death incident.

The situation was highly emotional for Bills players and many athletes and officials around the NFL, so it made the injury to rookie Russ Yeast on Sunday scarier than it probably needed to be because of its similarities to Hamlin’s.

During the Los Angles Rams’ overtime loss to the Seattle Seahawks this weekend, Russ Yeast — who was filling in for safety Nick Scott — was knocked out of the game with what was called a chest injury. While he was listed as questionable to return, he never did.

Following the game, The Athletic Rams beat writer Jourdan Rodrigue was one of several individuals that reported Yeast never came back on the field because he required a trip to the hospital after suffering a pulmonary contusion. The 23-year-old who was drafted in the seventh round in April is reportedly in stable condition and expected to stay overnight in the hospital for observation. 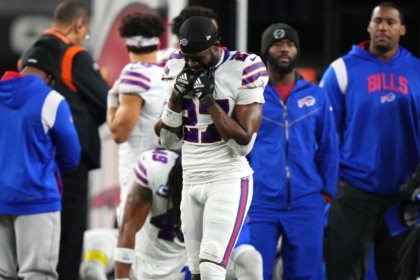 A pulmonary contusion is essentially a bruise on the lung. However, after what happened to Hamlin, any chest injury that requires a visit to the hospital for a football player is sure to set off some alarms for worry. However, the Los Angeles Rams player should be just fine in a few days.