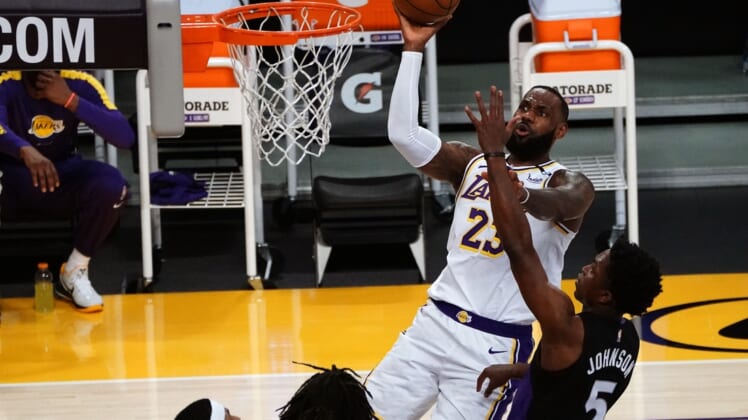 Los Angeles Lakers star LeBron James will sit out Monday’s game against the Denver Nuggets after re-aggravating an injury to his right ankle, multiple outlets reported.

James sprained the ankle during a game against the Atlanta Hawks on March 20 and missed the next 20 games. He returned to action Friday and played in the weekend losses at home to the Sacramento Kings and Toronto Raptors.

Monday is the second half of a back-to-back for Los Angeles after Sunday night’s 121-114 loss to Toronto. James left the game with seven minutes remaining in the fourth quarter due to what the Lakers called a sore ankle.

The Lakers have lost six of their last seven and entered Monday in a three-way tie for fifth place in the Western Conference with the Dallas Mavericks and Portland Trail Blazers. All three teams are 36-28 with eight games to play.

This season, the top six teams in each conference make the standard playoff bracket, while the seventh- through 10th-place teams will compete in a play-in tournament for the final seeds.

With the defending champion Lakers now in danger of dropping out of the top six in the West, James ripped the playoff format after Sunday’s loss.

“Whoever came up with that s– needs to be fired,” he said.