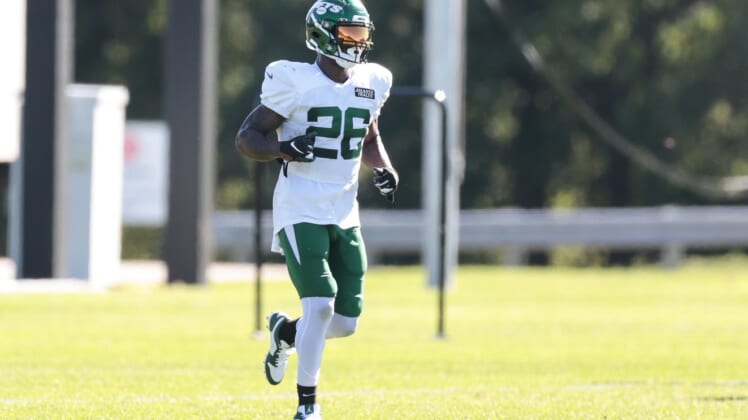 The New York Jets signed Le’Veon Bell to a massive contract before the 2019 season, hoping he could provide a spark for the offense. A year later, Bel”s relationship with head coach Adam Gase is rocky and he could now be in jeopardy of losing his featured role.

Coming off a disappointing first season in New York, Bell put in some serious work this offseason and even took responsibility for his poor performance in 2019. With the 2020 season right around the corner and training camp ramping up, things don’t look promising for the former All-Pro running back.

The Jets surprised many this offseason when they signed Frank Gore, reuniting Gase with one of his favorite players ever. Many thought Gore, entering his 16th NFL season, would see limited snaps this year. Based on the latest news from training camp, a different story might unfold.

According to the New York Post‘s Brian Costello, Bell has not been impressive in training camp the past two weeks. In fact, he has been outperformed by both Gore and rookie running back La’Mical Perine.

While Bell might have shown up in shape this summer, he apparently doesn’t look like the player who was a three-time Pro Bowl selection with the Pittsburgh Steelers. Instead, the 28-year-old isn’t showing explosiveness and seemingly lacks the vision he used to have.

It’s no secret that Gase adores Gore and the veteran running back is receiving significant reps with the starting offense in training camp. New York also just traded for Kalen Ballage, who averaged 5.3 yards per carry as a rookie in 2018 under Gase.

The Jets can’t cut Bell and trading him is likely out of the question given he carries a $15.4 million cap hit this year. So, New York will have no choice but to head into the regular season with him on the roster, amid a growing rift between Bell and Gase.

Just a few years ago, Bell was the best running back in the NFL and a consensus top-five pick in fantasy football every year. Ever since holding out in 2018, fantasy players have been burned by the star running back and that’s likely to continue this year.

Bell’s stats were atrocious for a player of his caliber in 2019. He averaged only 3.2 yards per carry and finished the season with only 789 rushing yards and four total touchdowns in 15 games. Unfortunately, we’re likely to see more of the same this season.

While the Jets made additions to the offensive line this offseason, reports out of training camp make it clear this unit hasn’t improved. So, it will once again remain a challenge for any running back behind Sam Darnold to find running lanes.

Le’Veon Bell’s current average draft position is 46th overall. per FantasyPros. He is being taken as the No. 21 running back off the board, ahead of players like Mark Ingram, Raheem Mostert and Kareem Hunt.

Given the reports out of training camp, it would be wise for fantasy players to avoid Bell completely this season. If every other NFL team is avoiding him, so should fantasy teams.