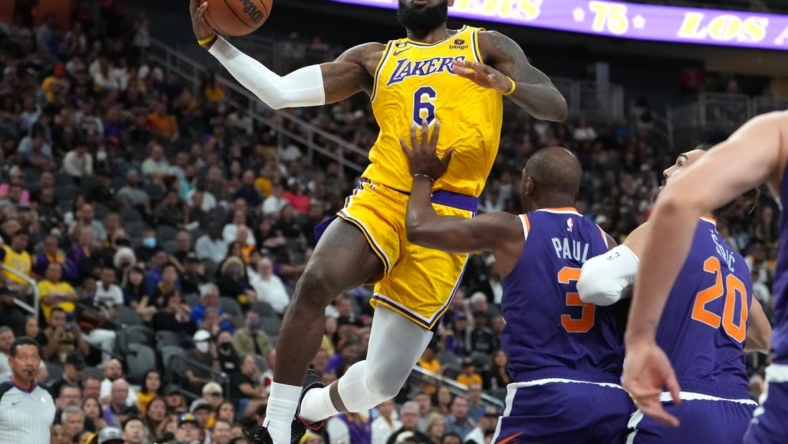 LeBron James made his post-retirement goals clear: He wants to own an NBA team, and he wants it in Las Vegas.

“I would love to bring a team here at some point,” he told reporters after scoring 23 points in the Los Angeles Lakers’ loss to the Phoenix Suns in a preseason game played Wednesday night in Las Vegas.

And he addressed commissioner Adam Silver, who was not in Las Vegas, directly.

“He probably sees every single interview and transcript that comes through from NBA players,” James said. “So, I want the team here, Adam. Thank you.”

This isn’t the first time James has linked potential future ownership and Las Vegas. He talked about expanding his sports ownership portfolio in June on an episode of his show, “The Shop: Uninterrupted.”

He is a part-owner of the Boston Red Sox and Liverpool FC.

James, 37, is entering his 20th NBA season. In August, he signed a $97.13 million extension with the Lakers that runs through the 2024-25 season. He cannot have an ownership interest in an NBA club until he retires, by league rule.

In June, Silver addressed the potential of expansion beyond 30 teams. While he said it currently isn’t on the table, he added that Las Vegas and Seattle would be desirable locations down the road.

“Those are wonderful markets,” Silver said. “We were in Seattle. I’m sorry we are no longer there. We have a WNBA team in Seattle in an almost brand-new building that’s doing spectacular. And Las Vegas … has shown itself to be a great sports market as well.”

James has a net worth of $1 billion, according to Forbes, so he’d need to join an ownership group to buy an NBA team. The Suns, currently for sale, are expected to change hands for more than the record $2.35 billion that Joe Tsai paid to buy the Brooklyn Nets in 2019, Sports Illustrated reported Wednesday.