The NBA needs LeBron James vs. Stephen Curry as much as we do

As the 2020-21 NBA season draws to a conclusion, injuries to stars such as LeBron James of the defending champion Los Angeles Lakers have been among the top storylines.

The regular season started in late December and will be coming to a conclusion in mid-May. During that span, teams will be asked to play 72 games. The truncated nature of the season following a 2019-20 campaign defined by the COVID-19 pandemic has seemingly led to an uptick in injuries.

As for Stephen Curry and the Golden State Warriors, that came to a brutal culmination even before the season started when future Hall of Fame guard Klay Thompson suffered a torn Achilles.

Despite this, Curry is playing at an MVP level and currently has his Warriors as the eighth seed in the Western Conference with less than a week to go before the end of the regular season.

A bit further down south, LeBron James is sidelined once again due to a high-ankle sprain that has been ailing him since all the way back in March 21.

After a 21-6 start to the season, Los Angeles has fallen on hard times with both James and a recently-returned Anthony Davis sidelined to injury. The defending champs have posted a 17-24 record over the past 41 games — setting the stage for a likely play-in matchup with the Warriors for the seventh seed out west. Here’s why the NBA needs this just as much as fans watching the games.

Of the 10 most-watched NBA nationally televised games, the Warriors have appeared in five of them. It’s no coincidence that Stephen Curry’s historical performance has played a role in this.

As for King James and the Lakers, they exist in North America’s second-largest media market. Their draw when it comes to a potential play-in matchup with the Warriors would also be under the premise of opposing teams hoping Los Angeles bombs out before even the first round of the NBA Playoffs mere months after winning the 2019-20 NBA title.

Fresh off a 2020 NBA Finals between the Lakers and Heat that was the least-watched iteration in the history of the Association, commissioner Adam Silver and Co. need this storyline. Now that the political divisiveness that defined last season might be behind us to an extent, this is magnified even further.

During James’ second stint with the Cleveland Cavaliers, he faced off with the Golden State Warriors in the NBA Finals four consecutive years. The King brought Cleveland its first (and only) NBA Title while falling to Stephen Curry’s Warriors the three other times.

It really was the height of modern basketball, rivaling to an extent when Michael Jordan lifted the association up from the doldrums back in the 1990s.

Game 7 of the 2016 NBA Finals in Oakland drew the third-highest TV ratings for an NBA Finals matchup in Association history. It just so happened that James led his Cavaliers to shocking road win over a Warriors squad that bested Michael Jordan’s 1995-96 Bulls team for the most wins in regular season history with 73.

The rivalry is real. Two the greatest players in modern NBA history. Two players who changed the game once they started to take over. Two California rivals who have not met in the postseason since Magic Johnson led his Lakers to a win over Tim Hardaway, Chris Mullen and the “Run TMC” Warriors in 1991.

“The concern for the Lakers right now – that right ankle of LeBron James that kept him out for six weeks, has put him out again – this is not going to get a lot better,” ESPN’s Adrian Wojnarowski noted recently. “He’s going to have to play with discomfort in the postseason. It’s not going to be until the summer. So there’s an even greater load on Anthony Davis here. But the question still remains of how effective LeBron James can be.”

This comes on the heels of James missing 20 games to injury earlier in the season. After returning for just two outings, the four-time NBA champion remains sidelined. While he’s expected back this week, it’s clear that James is not going to be 100%. This is a major backdrop given that Los Angeles is just 10-15 in games he’s missed this season.

As for the 33-year-old Curry, he’s doing stuff we have not seen on an NBA court since Michael Jordan and Kobe Bryant were in their heydays. That’s not hyperbole.

Since returning from a tailbone injury back on March 29, Curry is averaging 37.2 points on 46% shooting from three-point range. He’s also made 10 or more three-pointers five times during that 21-game span. To put this into perspective, Klay Thompson is the only other player in NBA history to have had five such games in his career. 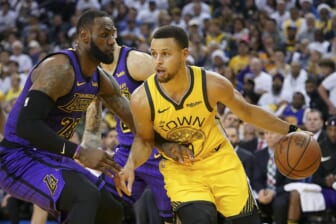 This hypothetical one-game set for the seventh seed in the Western Conference wouldn’t be loser go home. The loser would then go on to play the winner of the ninth and 10th seed for the eighth spot. But the backdrop is as dramatic as if it were to be a do-or-die battle.

Legacies could be defined. Heroes might be reborn. A rivalry renewed. Yes, the NBA needs LeBron James vs. Stephen Curry just as much as we do.