LeBron James: ‘Not my job’ to advocate for vaccine

LeBron James drew a line in the sand over being an advocate to other players getting the COVID-19 vaccine, saying Tuesday he doesn’t think it’s his place to “get involved” in decisions about “people’s bodies.”

James made the comments during Los Angeles Lakers media day, touching on the vaccine as well as the addition of former league MVP Russell Westbrook.

But it was vaccinations against COVID-19 that took center stage, as James confirmed he has been fully vaccinated despite being “very skeptical about it all” before doing his research.

“I don’t talk about other people and what they should do,” James said.

“We’re talking about individual bodies. We’re not talking about something political or racism or police brutality,” James went on. “I don’t think I personally should get involved in what other people do for their bodies and livelihoods.

“I know what I did for me and my family. … But as far as speaking for everybody and their individualities and things they want to do, that’s not my job.”

Lakers coach Frank Vogel said the team is on track to be 100 percent vaccinated.

James also touched on the addition of Westbrook and what the two-time scoring champ needs to do in his first year with the Lakers. 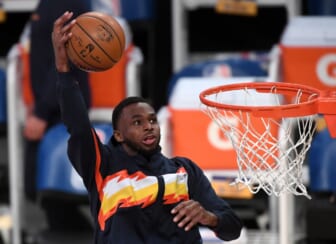 Westbrook brings career averages of 22.2 points, 11.7 assists and 11.5 rebounds to the Lakers. But he was also party responsible for helping the Lakers land another key piece.

Trevor Ariza said Westbrook was the biggest on-court influence bringing him to L.A.

“Russ, as soon as he got traded, he was on my phone like, ‘What’s up, I need to talk to you.’ I’m like, ‘What the f— you want to talk to me about? Russ is my dawg. We stay in constant communication,” Ariza said.