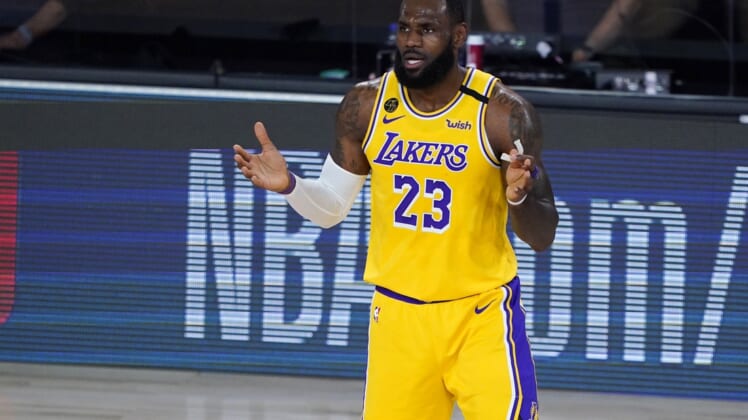 The Los Angeles Lakers have lost three of five since entering the bubble at Walt Disney World in Orlando. That includes blowout losses the Oklahoma City Thunder and Houston Rockets in consecutive days earlier this week.

Despite already wrapping up the No. 1 seed in the Western Conference, there’s some concern on this front. Lakers star LeBron James opened up about the struggles to Joe Vardon of The Athletic recently.

After talking about attempting to find rhythm on offense, the three-time NBA champion seemingly took the conversation in another direction.

“It’s just some things that you can’t control that’s here, that I really don’t want to talk about, that’s off the floor,” James said.

Vardon pushed James on an answer, bringing up the quality of food, fishing, potential tee time on the golf course and the like. James response was “hell, nah” before refusing to be more specific.

This is a rather interesting take from James. Sure things are different inside the bubble at Walt Disney World. It’s still telling that he’s pointing to unspecified off-court issues.

For his part, the MVP candidate struggled through the first four games before missing Thursday’s outing against the Houston Rockets with a minor groin injury. James is averaging just 19.3 points on 42% shooting from the field, including a 27% mark from distance.

A four-plus month hiatus since the season was suspended back on March 11 has certainly played a role here. But the Lakers need to get it fixed over the final three regular-season games.

Having already locked up the top seed out west, there’s a chance that Los Angeles could face a difficult first-round foe in that of the Portland Trail Blazers, Phoenix Suns or San Antonio Spurs.

Blazers guard Damian Lillard has gone off in Orlando, averaging north of 40 points per game. Phoenix remains the only undefeated team in the bubble, primarily due to Devin Booker’s brilliance. Meanwhile, the Spurs are a veteran-laden squad under the leadership of all-time great coach Gregg Popovich.

There’s no reason to panic. Los Angeles is set for a long playoff run and a potential NBA title. But that first-round series could get interesting.