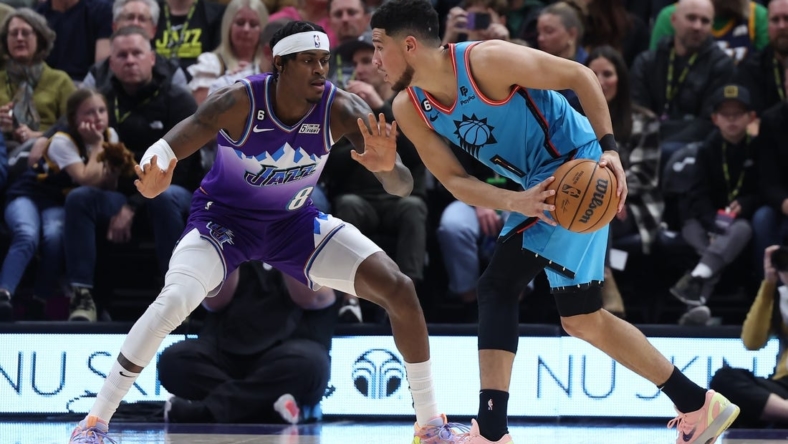 Lauri Markkanen scored a career-high 38 points and sank a late clutch jumper to help the Utah Jazz snap a three-game losing streak with a 134-133 victory over the Phoenix Suns on Friday night in Salt Lake City.

Phoenix’s Devin Booker went off for 49 points and 10 assists and made a buzzer-beating shot, but his last-second basket was only for two points after he grabbed an offensive rebound from a missed 3-point attempt by Damion Lee.

Booker shot 16-for-31 from the floor and made all 15 of his free-throw attempts while keeping the Suns in the game after Phoenix fell behind by 19 points in the first quarter.

Markkanen made 15 of 18 field-goal attempts, including a key 20-foot turnaround jumper that gave Utah a three-point lead with 37.9 seconds remaining. The Jazz improved to 10-0 when he scores 18 or more points.

Malik Beasley helped carry part of the offensive load for the Jazz, draining seven 3-pointers en route to scoring 27 points, while Jordan Clarkson chipped in with 20 points. Mike Conley added 13 points and 10 assists to help Utah, which shot a sizzling 56 percent, bounce back from its first home loss on Tuesday to the New York Knicks.

DeAndre Ayton logged 17 points and 10 rebounds, Cameron Payne scored 17, Torrey Craig finished with 16 and Mikal Bridges had 13 for the Suns, who shot 52.1 percent.

The Jazz were on fire to start the game, rolling to a 19-3 lead thanks to two early 3-pointers apiece by Clarkson and Conley. The lead was stretched to 31-12 midway through the first quarter.

The Jazz were up by eight at halftime, but the margin was just two after three quarters. In the fourth quarter, the Suns took their first lead of the game, 121-120, when Lee sank his second 3-pointer of the game with 7:28 to go.

Utah responded with an Olynyk hoop and then a Clarkson layup.

Booker sliced Utah’s lead to 130-128 by sinking two free throws with 1:40 to play. Clarkson then scored before Ayton converted a three-point play to get Phoenix within one with 1:01 left.

Markkanen then came through with his clutch hoop.

Conley forced Payne into a traveling turnover with 32.5 seconds left, but the Suns got a rebound and called a timeout with 4.8 seconds remaining.