Laremy Tunsil falls to Miami Dolphins with No. 13 pick 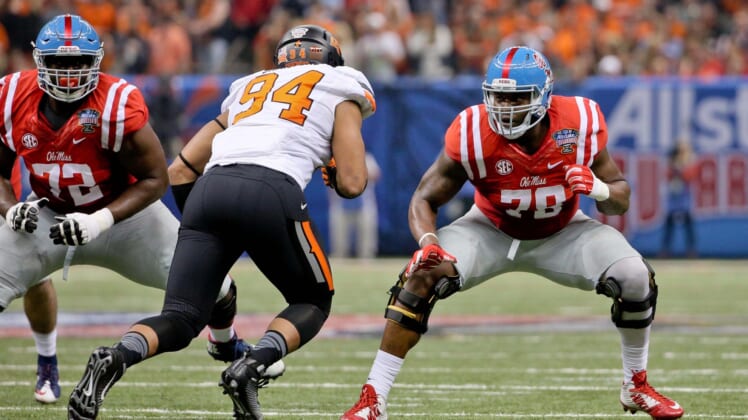 One of the bigger falls in recent memory of the NFL Draft is over, as the Miami Dolphins have taken Ole Miss offensive tackle Laremy Tunsil with the No. 13 pick in the 2016 NFL Draft.

This pick is unquestionably a risk. Tunsil had character issues heading into draft. The video of him smoking a bong which surfaced minutes before the draft caused him to be taken off of the Baltimore Ravens draft board. He was also sued by his step-father just days before the draft.

The character issues are legitimate, but his talent is unquestioned. With that in mind, this pick is an absolute steal. Prior to the draft, Tunsil was being talked about as possibly the first man off of the board after quarterbacks Jared Goff and Carson Wentz.

It’s understandable for teams to question people with character issues, but Tunsil should never have fallen this far. The bong video is troubling, but according to Tunsil it is also five years old. Not only that, but he didn’t fail any drug tests at school last year or leading up to the draft.

There’s nothing that was seen in that video that should make teams doubt Tunsil’s current commitment to football.

The pressure is now squarely on Tunsil’s shoulders to show that his problems in the past were just youthful indiscretions and not a sign of things to come. He’ll also have his work cut out for him. Since quarterback Ryan Tannehill came into the league, he’s taken more hits than any NFL signal caller, other than Andrew Luck.