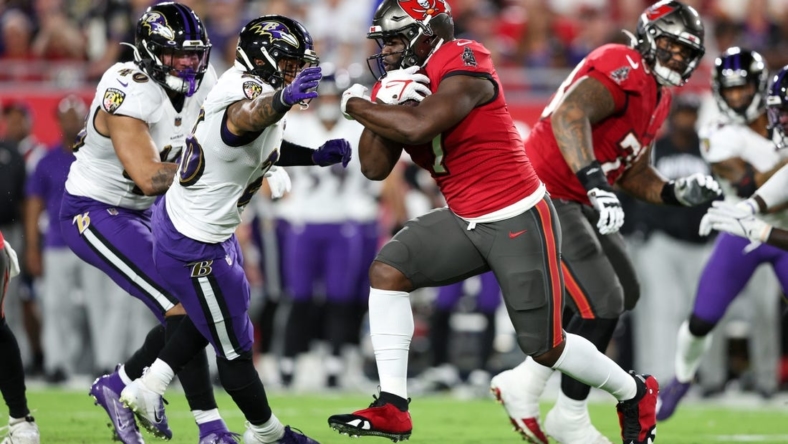 Baltimore (5-3) won its second game in five days and took a half-game lead on Cincinnati in the AFC North, while Tampa Bay (3-5) fell a half-game behind Atlanta for first place in the NFC South. Every team in that division owns a losing record.

Trailing 10-3 at halftime, the Ravens got their offense going behind Jackson. On its first drive of the second half, Baltimore covered 77 yards in nine plays, with Jackson finding Kenyan Drake for a 5-yard scoring strike.

The Ravens took the lead for good with five seconds remaining in the third, capping an 80-yard drive that lasted nearly seven minutes with a Jackson-to-Isaiah Likely 10-yard touchdown pass for a 17-10 advantage.

Baltimore added insurance tallies with 6:55 left on a 15-yard touchdown jaunt by Devin Duvernay and then Justin Tucker’s 30-yard field goal at the 2:12 mark. Brady hit Julio Jones for an 8-yard score with 49 seconds remaining, but the Ravens recovered an onside kick to wrap it up.

After a scoreless first quarter, the Ravens initiated scoring on Tucker’s 22-yard field goal with 11:03 left in the first half. Baltimore began that drive on the Tampa Bay 6-yard line after recovering a muffed punt.

But the Buccaneers responded on their opening drive, their first of two 75-yard scoring drives, which ended on Leonard Fournette’s 1-yard run with 6:56 left in the first.

Tampa Bay made it a seven-point lead when Ryan Succop hit the first of his three field goals, a 31-yarder with 26 seconds remaining in the half.

Along with scoring his first career touchdown, Likely, a rookie out of Coastal Carolina, set career highs with seven receptions and 77 yards. He took over the primary tight end role after All-Pro Mark Andrews left the game in the second quarter with a shoulder injury and did not return.

Andrews had 33 yards on three catches before leaving.