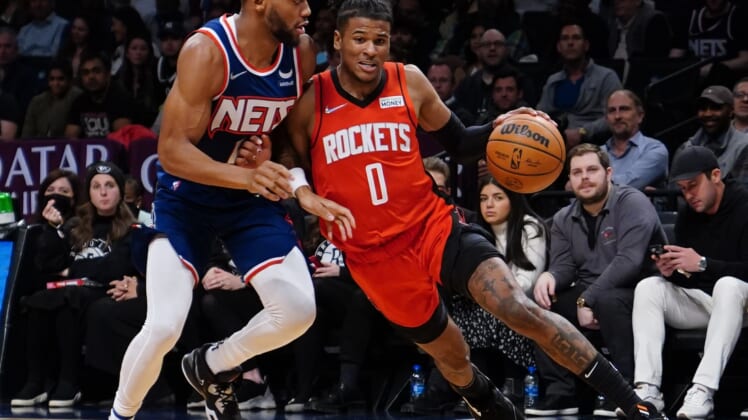 Kyrie Irving scored 42 points as the Brooklyn Nets led most of the way and picked up a crucial 118-105 victory over the Houston Rockets on Tuesday night in New York.

Brooklyn (41-38) moved into ninth place, alongside the Atlanta Hawks, and one game ahead of the Charlotte Hornets. The Nets also moved within 1 1/2 games of the seventh-place Cleveland Cavaliers.

Irving’s best showing since being allowed to play home games occurred on a quiet night for Kevin Durant, who followed up his 55-point showing Saturday by finishing with 18 points on 4-of-13 shooting Tuesday. He made 9 of 10 free throws to make up for the poor field-goal performance.

Kevin Porter Jr. scored a season-high 36 points as the Rockets (20-60) hung around most of the fourth quarter before dropping their fifth straight. Rookie Jalen Green added 30 points for his fifth straight game with at least 30.

Porter’s 3-pointer cut the deficit to 77-65 with 5:39 to go, and the Nets took a 90-74 lead into the fourth after Porter hit another 3-pointer with two seconds remaining in the third.

Houston scored the first seven points of the fourth and forced Brooklyn to burn a timeout when Green hit a 3-pointer with 10:29 remaining.