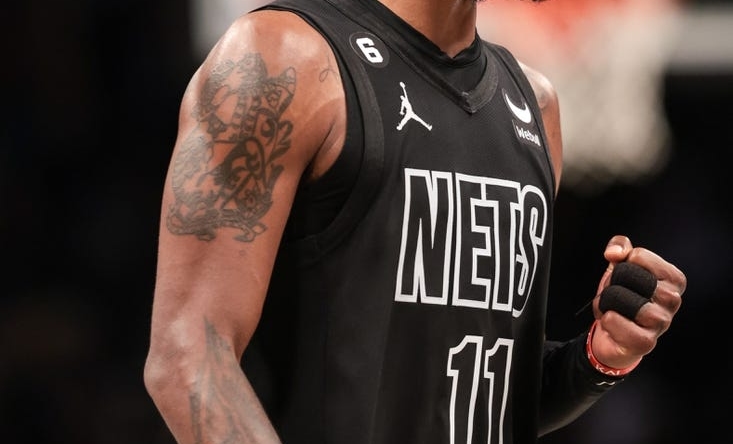 The Brooklyn Nets and Kyrie Irving released a joint statement Wednesday and pledged to donate $1 million to combat “hate and intolerance,” a response to Irving’s support of a movie that did just that by promoting antisemitic tropes.

Irving in the statement said he “meant no harm.”

Notably, Irving did not apologize for linking to the movie “Hebrews to Negroes: Wake Up Black America” that he shared four days prior to removing the link Sunday. Nor did he renounce it.

Irving has embroiled the Nets’ organization in controversy since his support of the movie first surfaced.

“I oppose all forms of hatred and oppression and stand strong with communities that are marginalized and impacted every day,” Irving said in Wednesday’s statement. “I am aware of the negative impact of my post towards the Jewish community and I take responsibility. I do not believe everything said in the documentary was true or reflects my morals and principles.

“I am a human being learning from all walks of life and I intend to do so with an open mind and a willingness to listen. So from my family and I, we meant no harm to any one group, race or religion of people, and wish to only be a beacon of truth and light.”

According to the statement, the Nets and Irving “will each donate $500,000 toward causes and organizations that work to eradicate hate and intolerance in our communities.”

Further, Irving and the Nets will work with the Anti-Defamation League to fight “antisemitism and all types of hate that undermine justice and fair treatment for every individual.”

“There is no room for antisemitism, racism, false narratives or misguided attempts to create animosity and hate,” said Sam Zussman, CEO of BSE Global, parent company of the Brooklyn Nets and Barclays Center. “Now, more than ever, there is a pressing need to ensure education in these areas. We are putting our prior statements into practice because actions speak louder than words.”

“Hebrews to Negroes: Wake Up Black America” traces the theory that Jews claimed the religion and identity of the original Israelites, which prompted the enslavement of Africans then brought to America.

Irving hasn’t backpedaled since sharing the post, which was criticized by Nets’ ownership. When pressed on why he shared the film and supported its message on Saturday, Irving took a detour.

“My response would be it’s not about educating yourself on what Semitism is and what antisemitism is, it’s about learning the root words of where these come from and understanding this is an African heritage that is also belonging to the people. Africa is in it whether we want to dismiss it or not. So the claims of antisemitism and who are the chosen people of God and we go into these religious conversations and it’s a big no-no. I don’t live my life that way.”