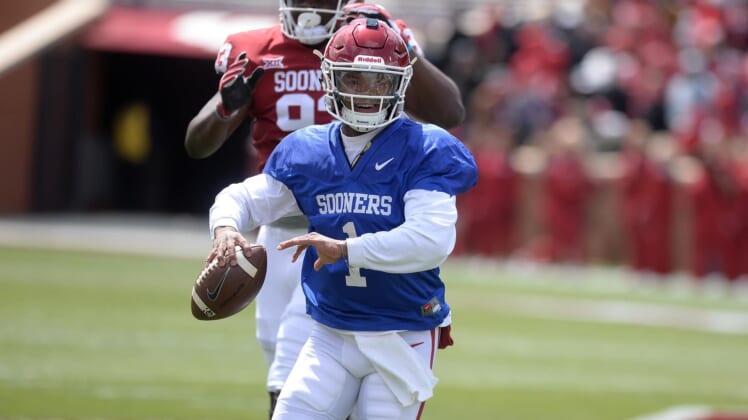 Kyler Murray winning the Heisman Trophy has seemed to re-ignite speculation that he might look to play in the NFL. If he does, it will cost him a lot of money from the contract he signed with MLB’s Oakland Athletics.

MLB Network’s Jon Morosi confirmed that playing in the NFL would cost Murray a good portion of his signing bonus.

Can confirm Kyler Murray’s contract with #Athletics includes a provision whereby he’d forgo/repay a very large portion of his signing bonus if he opts to play in the NFL. @MLB @MLBNetwork

That obviously makes sense. It would be surprising if there was any other sort of deal.

Murray’s agent, Scott Boras, has made it clear that Murray’s intention is to play baseball. He’s gone as far as to say that Murray won’t play in the NFL.

But in a media session during MLB’s Winter Meetings, Boras redirected a question about how possible playing both baseball and football would be.

When I asked Boras if there is any scenario in which Murray could play baseball and football, Boras responded, “That’s a question for Billy Beane.”

Murray’s situation is very unique. Bo Jackson and Deion Sanders played in MLB and the NFL at the same time. Brian Jordan played in the NFL as he was in Minor League Baseball, though he left football before reaching the majors. But it’s much easier for a running back like Jackson or a defensive back like Sanders or Jordan.

Murray is obviously an exceptional athlete. But this would be a tall task.