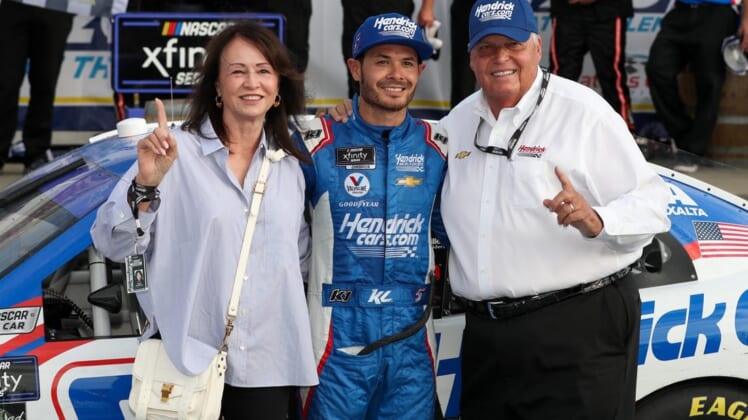 Kyle Larson beat Hendrick Motorsports teammate Chase Elliott in a late restart Sunday to repeat as the winner of the Go Bowling at the Glen at Watkins Glen International in Watkins Glen, N.Y.

With five laps to go and on the front row with Elliott, Larson — who also won Saturday’s Xfinity race — ran his No. 5 Chevrolet deep into Turn 1 and forced Elliott’s No. 9 off the 2.54-mile road course.

Larson held a steady lead over AJ Allmendinger and went on to record his second win of 2022 — the other coming at Auto Club Speedway, his home track in Fontana, Calif. in late February.

The victory marked his fourth time taking the checkers on a road course and second at Watkins Glen.

Allmendinger brought his car home second, 0.882 seconds behind, while Joey Logano, Elliott and Daniel Suarez rounded out the top five.

Elliott earned enough points to clinch the regular season’s point championship, giving him even more of a playoff bonus when NASCAR begins the postseason in two weeks.

The event was delayed for an hour because of lightning and started in a downpour, forcing teams to bolt on rain tires.

Entering the race as the betting favorite, seven-time road-course winner Elliott claimed his 12th career pole starting position in qualifying, and his No. 9 Chevrolet led the 39-car field to the checkers in New York’s Finger Lakes region.

Yet as multiple cars were sliding off the rain-soaked course throughout the field, Michael McDowell made a power move and passed Elliott on Lap 4 for the lead and pulled away.

However, the rain soon stopped, and many teams decided to switch to slick tires instead of rain ones to navigate the serpentine course as Stage 1 neared its end.

As the track continued to improve to normal dry conditions, Logano beat Kyle Busch for his fourth career stage win on Lap 40.

Former Formula 1 champion Kimi Raikkonen made his Cup debut by starting 27th for the No. 91 Trackhouse Racing team. After running as high as ninth early, the Finnish driver brought the Chevrolet home in 37th after wrecking into a tire barrier in the middle of the 90-lap race.

“It was good fun. I felt more confident all the time,” said Raikkonen, who won the 2007 F1 championship.